Adrienne Maloof Lied About Hiring A Surrogate To Carry Her Children? 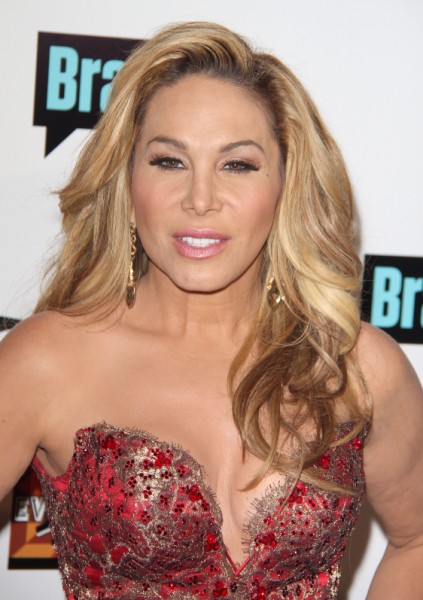 So this is why Brandi Glanville was bleeped on the show!

If many of you are Real Housewives junkies then you probably noticed the huge fight between Adrienne Maloof and Brandi Glanville last week. Brandi apparently told the whole group something nasty (and probably true) about Adrienne at a dinner party which she was not at. When Adrienne found out what Brandi said she and her (now) estranged husband Paul, went ape shit on her in front of a huge crowd of people calling her a bitch and a liar. But no one knew what Brandi had said but a new Blind Item might shed some light on the mysterious situation.

Blind Gossip has the details:

This Television Personality likes to provide details of her pregnancy and birth so that she can seem like a good mom.

Only it’s all a lie. The Liar publicly claims to have carried her children and to have given birth to them herself. The truth is that she used her money to hire a surrogate (for more than one child) so she wouldn’t “ruin her body” and she could have babies “whenever she wanted.” Yes, she is that rich and that superficial. No medical issues. Just vanity.

Well, someone on her television show has called her on her lie. The price for spilling the beans? A lawsuit. This woman is rich and vengeful and she won’t hesitate to use her money to squelch the truth so that she can maintain her image… and hurt The Spiller.

The only problem is that in filing a suit… she has to reveal her secret. Then the world will know. And her kid/s will know.

That’s the second secret. Her children don’t know that they are the product of surrogacy! That’s because The Liar shows them photos of her with a pillow under her shirt and tells them that the photo was taken when Mommy was pregnant with them. Did she really think she could get away with that one forever?

There’s also a third secret The Liar has been keeping. It’s about who she has been sleeping with for the couple of years. It’s not her husband. It’s someone who is well-known to people in her area. And he would not appreciate being outed as the third party in her marriage.

So, The Liar would be well-advised to back off at this point. The Spiller – and others – do not respond well to threats. And they have lots more to spill.

So are you getting an Adrienne Maloof/Brandi Glanville vibe? I’m telling you – Brandi only tells the truth! She doesn’t have money but she has a mouth and no shame which makes her very powerful. What would we do without her? I wasn’t entirely sold on this blind item at first. Adrienne never talks about her kids on the show and RARELY films with them so that didn’t fit with the whole “likes to provide details of her pregnancy and birth so that she can seem like a good mom” although, now that I think about it, wasn’t there a recent episode where all the women sat around a table talking about their labors? So that might fit after all. Bravo thinks it’s so smart. There was also a scene where Paul remarked on Adrienne’s eating habits. He taunted her for how little she eats. I remember thinking it was a weird and out of place clip at the time. I wonder if Bravo was dropping hints about the mystery bleeping the entire time.

Am I weird if I say I don’t care about the surrogacy thing? Ya, it’s odd but rich people do rich people things. I’m really not surprised but I don’t know why she denies it. Who the hell cares? The pillow picture is bizarre though. Way to cover your tracks Adrienne! I’m mostly curious about the affair. Stevie Wonder could see that marriage had problems so why not throw an affair in with all the abuse allegations? But who could it be???