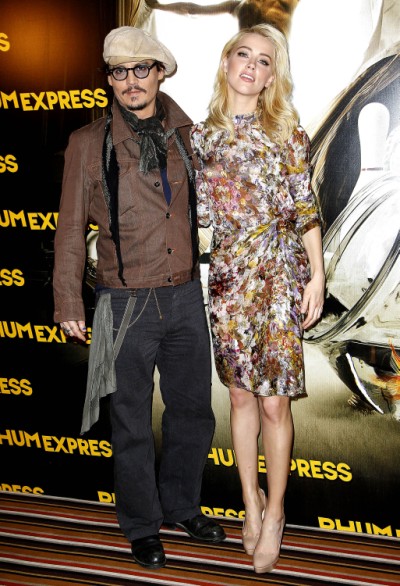 Johnny Depp’s other woman, Amber Heard, is not comfortable being coined a homewrecker and is cooling her relationship with the mega star in the hopes the media will fade away so she and Johnny can reevaluate what they are and what they hope to be in peace.

Hey, no one ever said stealing the hottest actor in the world away from his wife and keeping him was easy! And Amber is learning that lesson the hard way. Radar Online reports that Amber and Johnny haven’t had the smoothest ride since the media found out about their clandestine romance.

“They definitely had chemistry carried over from the set. Amber quietly split from Tasya around the same time Johnny was secretly separated from Vanessa, so the timing was just right. They were hooking up for months — way before he publicly announced that he and Vanessa had split up. They did a really good job of keeping their relationship on the down low for a while, especially since many people assumed that Amber was only into girls,” a source told Radar. “Amber has never wanted that sort of attention. She prides herself on being free-thinking and independent — not some homewrecker trying to sleep her way to the top. As soon as the media started publicizing the romance, she told Johnny that she needed some space. The crazy thing was that Johnny actually split from Vanessa at the end of last year, so she didn’t break them up, but because they didn’t announce their relationship was over until June, people were painting her as some kind of scarlet lady, which she is far from being. She really likes Johnny, but she doesn’t like the drama. She isn’t really sure what is going to happen with them, but just wants the attention to cool down before anything progresses.”

OK, OK, so I retract my statement. Amber asserts she didn’t steal Johnny away from Vanessa Paradis. Fine. I’m sure Vanessa appreciates the timeline distinction… but probably not. I get the chick thinks she’s free-thinking and whatever but does she think at all? What did she think was going to happen when she hooked up with the most popular actor in the world? It’s not like Johnny’s only making indie movies that no one sees anymore. He’s a Disney star for Christ’s sake – every minivan in the world wants to know about his life! Did she assume the tabloids were just going to send her a fruit basket and offer her best wishes?

Maybe, I just can’t comprehend anyone telling Johnny to step off for awhile. Ya, I think that’s my problem. It’s like first I thought she was a homewrecker and now I think she’s lazy and wasteful. Not fair? Of course it isn’t!

If I were her though, I’d be kind of p-ssed at the way Johnny handled things. He waited too long to drop the Vanessa bombshell. His hesitancy and odd behavior is what got the media sniffing around Amber. I don’t recall there being any rumors about the two when they were filming and it could have stayed that way if he could have kept his sh-t together. But he went through these midlife crisis episodes that got people more interested in his private life and ultimately led them to Amber. So now Johnny can still be Johnny but Amber is “a man-stealing, two-bit nobody” as Vanessa likes to say.

Do you believe Amber wasn’t the real reason behind Johnny and Vanessa’s split? Do you blame Johnny for Amber being labeled a homewrecker?