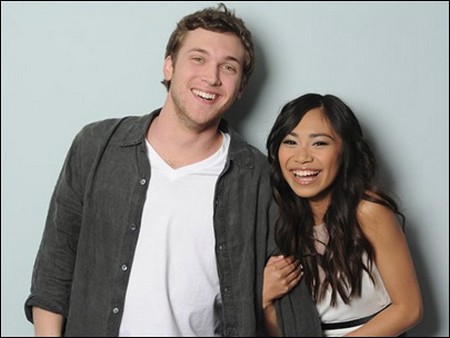 Last week on American Idol, uber talented Joshua Ledet was sent home. Did you see the episode? If you missed the show you can read our full performance recap HERE and the results recap HERE.

The season is almost over, the last performance show is tonight and then tomorrow the winner will be announced. The final two contestants are Phillip Phillips and Jessica Sanchez, Personally, Phillip Phillips is my favourite to win but Jessica’s odds are higher because of her strong Filipino following and tell the truth, it’s almost like the show is fixed. After all, shouldn’t Jessica win because she is the best singer and not because she is part Filipino?

If Jessica wins the Idol crown, it will be a major upset for a lot of people as although she is a very good singer, Phillip Phillips is truly the more talented contestant.

Jimmy Iovine thinks Jessica has a chance to win, but only if she pulls a perfect score of “10” on each performance. Now that has not always happened, proof is when Jessica released her “inner cheetah” on stage. Video here! If she wants to win, she better keep the cheetah caged up!

Last week, producer Nigel Lithgoe revealed who was his favourite contestant, “I promised I would reveal my favorite when they were voted off the show so….. it was Joshua. However, I am thrilled for Jessica & Phillip.” I can understand how he feels, Joshua was by the far the most talented of the three, check out his performing “A Mans Mans Mans World” HERE and you will see what I mean.

Jessica and Phillip talked about their final performances in an American Idol press release, you can watch it below.

Wednesday night is the big night, it’s the grand finale and Idol will entertain us with performances by Rihanna, Aerosmith, and last year’s Idol winner Scotty McCreery. We’ll also see the return of the Top 12 as they take the stage for performances. Rumours are that there will be surprise guests as in previous years and for all you Joshua fans out there, don’t be surprised if Fantasia doesn’t join him for a duet!

Wow, what do you think about the songs that Phillip and Jessica have to sing? Most importantly, who do you think is going to win and be crowned the 2012 Idol winner? Hit the comments and let us know your thoughts!