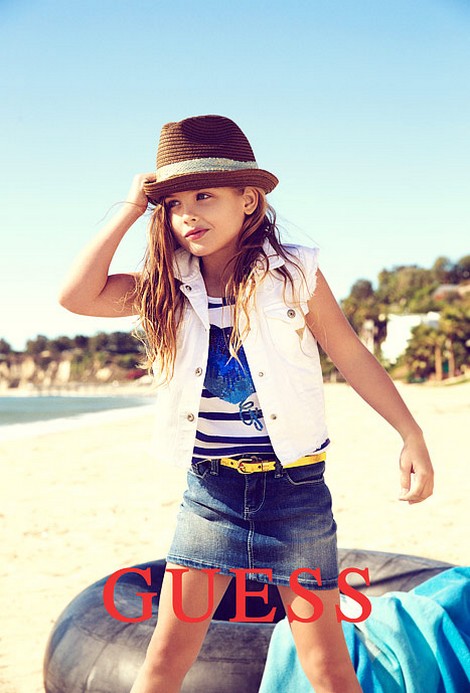 The death of Anna Nicole Smith was tragic, but made even more so because she left behind a 5-month-old daughter. Danielynn Birkhead has since lived with her dad, Larry Birkhead, and we’re happy to say that her mother’s beauty lives on in her. Dannielynn is following in her mom’s footsteps, hopefully not all of her footsteps, and has joined the GUESS family by starring in her own campaign. The now six-year-old will be seen in the spring 2013 collection, which will be out in January.

Dannielynn can be seen sporting a denim skirt, striped embellished tee, white denim vest, and kicky fedora. Paul Marciano, creative director for GUESS, commented on the choice to cast her. “Dannielynn has the same playful spirit that her mother had on set. She is a second-generation GUESS girl, which makes this campaign a first for us.” Anna Nicole first appeared in denim ads for GUESS in 1992 as an unknown. She quickly rose to fame and was named Playmate of the Year in 1993.

Although Anna Nicole passed away before her daughter could know her, it sounds like they share a modeling spirit. Larry commented on his daughter’s photo shoot: “Dannielynn had fun paying tribute to her mom with the GUESS ad campaign, but it is back to school for her which is her focus. The first thing she asked is ‘When will I be on the shopping bag like Mommy?”  Despite her enthusiasm, it looks like Dannielynn is quite capable—a second released photo show her looking pensive while leaning against a tree.

It sounds like Dannielynn is enjoying the fun side of this world, but I have to wonder if this is a healthy move for the long term. It seems like most child stars, whether their parents’ intentions are good or selfish, end up dealing with a lot of unnecessary stress. Having already lost her mom, I hope that this lovely little girl is surrounded by people who want what’s best for her, and who won’t try to take advantage and push her into this glitzy world. What do you think of her GUESS campaign? Too soon?

Doesn’t the poor child appear to be bearing a cross?