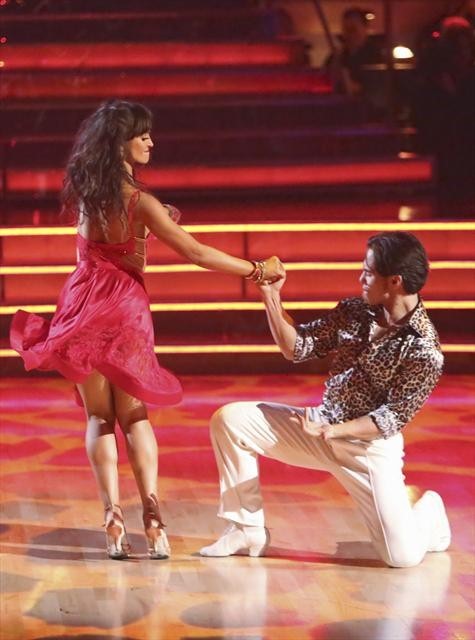 Apolo Anton Ono danced a Viennese Waltz routine for Country night, on Dancing with the Stars: All-Stars performance show tonight.  The danced their Viennese Waltz to “Skin” by Rascal Flatts.  All the 8 remaining couples hit the stage performing to some of country music’s biggest hits. The celebrity was also required to perform a solo during his or her routine.   If you missed the show, we recapped tonight’s show for you and if you want to see how all the couples did go HERE!

Apolo Anton Ono and professional dancer Karina Smirnoff dancing a Viennese Waltz routine.  Karina had this to say about Country Night, “Apolo is not really into country as much as I am. I actually love country, believe it or not. When I found out that we had Country Week, I knew exactly what I wanted to do. It’s one of my favorite bands of all time. They’re tremendous.”

Judges’ Comments: Bruno: “No question you are leading man, such ease.  You were graceful, you movements were excellent.  Your involvement with Karina was excellent!” Len: “Apolo, son of Zeus the roman god of light and music.  It had great musicality, it was 2 people in perfect harmony.  I loved it!”  Carrie Ann: “Dance is without emotion, is movement for movement sake.  That was poetry in motion, every motion had so much intention.  I am so proud of you, that was your breakthrough numbers.”

Watch the video below and let us know what you think? Do you think Apolo did enough to avoid elimination this week? Sound out in the comments below!