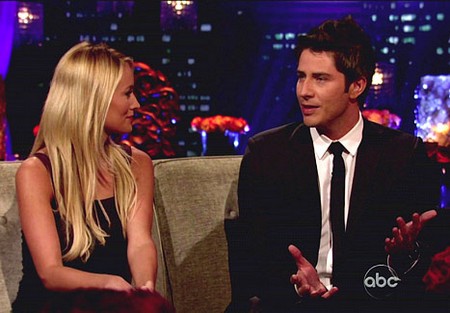 In day two of the “are they or aren’t they” debate, The Bachelorette runner-up Arie Luyendyk Jr. weighed in on the ongoing Emily Maynard and Jef Holm break-up (and maybe make-up) conversation. Although he was heartbroken when Emily jilted him for Jef, since then Arie maintains he only wishes them the best. Arie’s been in contact with Jef since he was given the Bachelorette’s boot.

Arie told Ryan Seacrest that Jef was back in North Carolina with Emily to “see if there is still a future there.” Hmm. But Arie also couldn’t confirm definitely if they’re back on saying, “I don’t know if Jef and Emily are back together. I know he went back to North Carolina to handle some stuff.”

So Arie thinks they’re exploring their options – that’s not really a definite declaration of anything. Actually the most interesting things Arie said weren’t about Emily and Jef, but about Arie and Jef.

Arie told Ryan, “I know the break-up was tough. I just want Jef to be happy.” Since when is Arie so invested in the guy he was jilted over? Perhaps he’s just making it clear that he doesn’t give a damn about Emily and her happiness?

Even weirder is Arie saying, “I don’t know if they’re hanging out – he won’t answer my phone calls. Either way I want him to be happy.” Emily and Jef may be off – but it almost sounds as if Arie and Jef are the new Bachelorette couple…

Also speaking out on the Emily and Jef break-up was her ex-fiancé Brad Womack! He tweeted the day news of their break-up broke: “Another one bites the dust.” Wow – what a romantic. It’s shocking that he failed to find love two times on the reality franchise.

First Em and Jef weren’t breaking up and now they’re possibly back on… What a rollercoaster of reality hype. Perhaps ABC has offered them a financial incentive to keep the showmance going on a bit longer. With the impressive failure record The Bachelor and The Bachelorette franchise has – it would no doubt help their ratings if even a modicum of the winners could manage to stay together.

The duo – let’s call them ‘Jemily’ for fun – were seen out and about in Emily’s NC hometown with daughter Ricki Hendricks in tow. Part of their “love story” was that Jef had become quite the father figure to 7 year old Ricki, but now that appears to have been part of the web of lies woven around Jemily. Jef even reportedly told his friends that Emily’s an absentee mom who doesn’t give little Ricki proper care.

Also speaking out on Jemily is Kaylee Shepherd – Jef’s ex – who says Jef told her Em gave him a cut of her Bachelorette payday to play along for a few extra months. That sounds a little more like reality than news of them getting back together.

I hope these two are done for good, but I have high hopes for the Jef and Arie bromance! I’m sure those two have a lot to talk about.