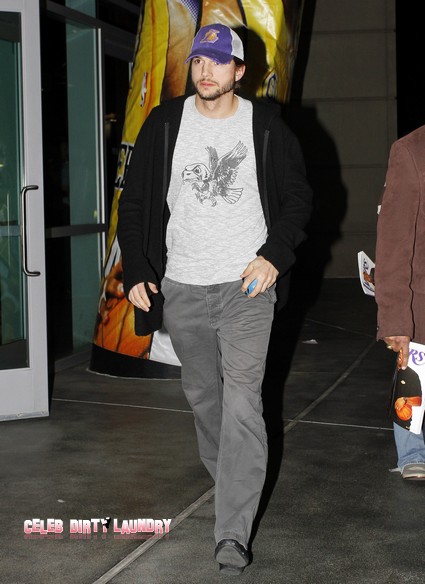 Ashton Kutcher has definitely moved on with his life and was spotted playing a romantic game of laser tag with his new girlfriend Lorene Scafaria.  Meanwhile his estranged wife, Demi Moore, has busted out of rehab way too soon and is back in Los Angeles – still looking anorexic.

BANG reports:   Ashton Kutcher has been spotted playing laser tag with rumoured girlfriend Lorene Scafaria. The 34-year-old ‘Two and a Half Men’ actor – whose six-year marriage to Demi Moore collapsed last November amid allegations he was unfaithful – was photographed sporting matching face paint with Lorene on their way Los Angeles’ Ultrazone on Saturday (03.03.12).

Ashton insists his relationship with the screenwriter is purely platonic, although according to RadarOnline.com they attended Madonna’s post-Oscars party together.

A source also claims the duo seemed to be romantically involved at a charity function on February 25.

A fellow partygoer told US Weekly:   “They were affectionate. When they thought no one was watching, they held hands, and she rubbed his back and his neck.”

Meanwhile, Demi has returned home from a Caribbean break following her stint in rehab – where she reportedly received treatment for addiction and an eating disorder.

Ashton has been hanging out with Lorene for over 2 months now and she is his certainly his girlfriend.  His team has told him to keep quiet about the relationship for fear of inciting more negative publicity for the dude.  Since Sara Leal burst into the public eye and reported the details of her sexcapades with Ashton the ‘Two and a Half Men’ star has been under a cloud.  People have considered him to be not only a cheating scoundrel but also insensitive to Demi’s condition leading to her collapse – for which he is largely to blame.

Should Ashton simply move on with his carefree existence while Demi struggles with her anorexia and addictions?  Is this fair?  Or Demi to blame for being such a cougar and refusing to grow older gracefully?  What was she doing with Ashton in the first place – after all he was just a kid when she snagged him.  Let us know your opinions in the comment section below.