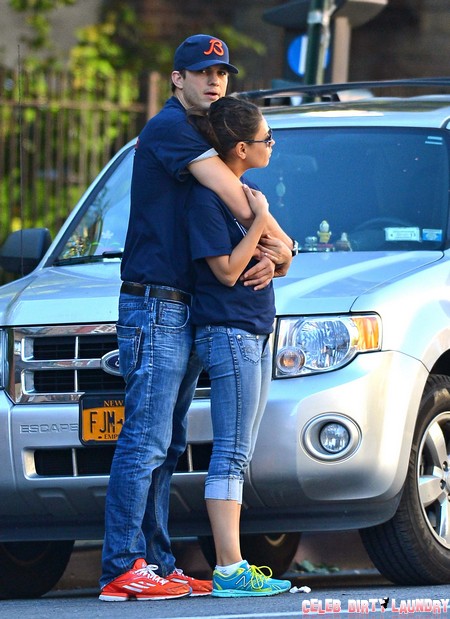 Ashton Kutcher and Mila Kunis are engaged! Not. According to the National Enquirer, Ashton Kutcher proposed to Mila in secret and Mila merely responded with a despondent “maybe”. See, this is the reason we only declare our undying love to our cats, they don’t respond with “Oh, cool!” or “Ditto”. They merely purr and treat us like human slaves. According to the Enquirer Print Edition, October 8th,  a friend revealed the reason behind Mila’s half-hearted commitment, “Mila loves Ashton, but Ashton has some issues, and he needs to work toward cleaning them up before she can even think about marriage.”

The reason Mila doesn’t want to become engaged to Ashton is as simple as an indie film plot – Demi Moore is still legally married to Ashton, even though she’s half-past crazy. Say what? Yes, allegedly, Ashton is waiting for Demi to “make the first move out of respect for her.” This isn’t a game of chess between delusional schizophrenics Ashton; this is the future you created when you became the second biggest cheater on the planet (Kristen Stewart takes first prize!). Karma has a way of sneaking up on you when you least expect it and we don’t blame Mila for saying “nuh-uh!” Seriously Ashton, would you marry your Punk’d self? The source continued, “This is no whirlwind romance for Ashton. He loves Mila and wants to marry her, but she’s begged him not to expect an immediate answer to his proposal.”

Didn’t Ashton and Demi go on whirlwind retreats with Simon & Garfunkel music to try and save their doomed marriage? What happened? How did he move on so quickly? What happened to Demi’s face? Mila, say no and run as fast and far as humanly possible.  Do you think Mila should become married to Ashton? Would you have said yes if you were in her position? What do you think is going to happen to Demi Moore? Let us know your thoughts in the comments below.