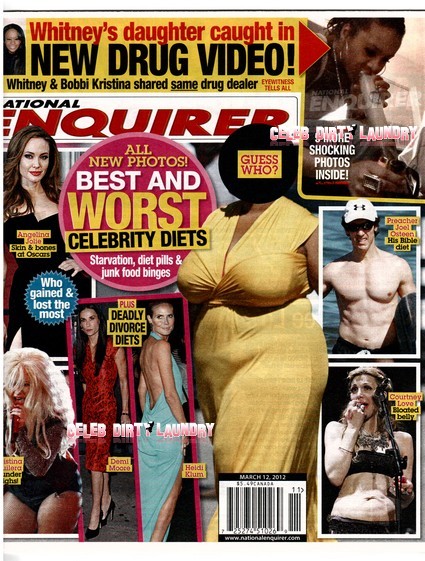 The March 12th, 2012 issue of National Enquirer features the cover story ‘All New Photos – Best and Worst Celebrity Diets.’ The magazine goes on to talk about how having the perfect body in Hollywood is never easy and they have the scoop on the celebrities who have given up on their diets. They also have the info on the celebs who have taken dieting too far. As you can see from the cover the skinny pics are scary as heck!

National Enquirer has the scoop: The magazine has discovered the best and worst celebrity diets revealing the weight-loss tricks that work – and those that fail miserably. The fails include Kathleen Turner from Body Heat to Body Meat, Frenchie Davis who is always misbehaving when she is eating, Mindy Cohan, Christina Aguilera, Ali Lohan who is wasting away and Kate Bosworth who is scrawny among many other. The best celebrity diets they feature are: Carrie Fisher, Janet Jackson, Kelly Preston and many more.

Take Ali Lohan as a perfect example. Lindsay Lohans’ super skinny sister Ali Lohan looks anorexic – no matter what her famewhore mother Dina says about it. Dina previously told Us Weekly that she “doesn’t read any of the rubbish” printed about her 18-year-old daughter’s emaciated figure. Dina went on to say that her model daughter’s health was ‘A-okay’ and that her sickly rail thin appearance was no cause for alarm. Of course Dina is the same mom who took Lindsay out partying and drinking when she just got of rehab… . Ali also denies that she has an eating disorder – what a surprise… saying she’s ‘always had a fast metabolism and is able to eat what she wants, from scrambled eggs with American cheese and hot sauce to Nutella. I can just eat [it] out of the jar with a glass of milk.’

Of course when one talks about excessive dieting Demi Moore immediately comes to mind. She took weight loss to the point where it was clear that her image of herself was at odds with what everyone else could see. By the time she collapsed and had to be rushed to emergency it was unclear if she consumed anything at all other than Red Bull!

Check out the new issue if you want to see tons of pictures of who gained and lost the most and find out all the details on celebrity deadly divorce diets.