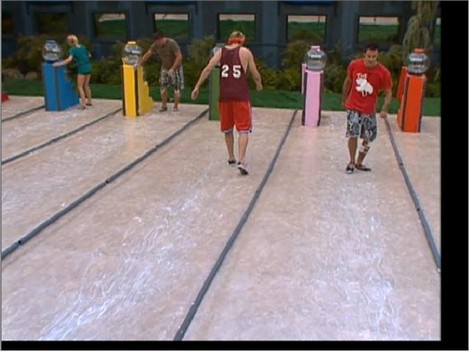 Tonight is another new episode of Big Brother 14 on CBS. Tonight we will get to see the conclusion of the Endurance competition to find out who will win HoH.  We already know it is Shane and we will also find out HoH Shane’s decision and who he will nominate for eviction. If you missed the last episode (Live Eviction), you can read our full and detailed recap here.

Last week Frank had all the power, or should I say, Boogie had all the power since he was running the show.  Both Joe and Wil were put up for eviction and even though Dan thought he may have been back doored when Frank won the POV, the nominations remained the same and Wil was sent home.

On tonight’s show Boogie thinks the “Silent Six” alliance is still going strong, but that gets blown completely out of the water when the house gets shaken to it’s core.  Tonight the house is as Shane announces his nominations for eviction.  If you must know we spoiled it for you and you can find out who he nominates HERE!

Of course the nominees will have a chance to save themselves at the PoV competition.  One thing I can assure you after watching the feeds this week’s three episodes is all about drama, drama and more drama!

Tonight’s episode: We get right back to where we left off in the last episode, the HOH competition. All the houseguests are having a hard time, the path is very slippery. Boogie has no intention of winning HOH, he is going for the cash prize of $10,000.00. Meanwhile, Ashley and Britney are both going for safety and the rest of the houseguests are going for HOH.

Boogie is still feeling good about his alliance and he’s really happy that Frank did not entertain the idea of putting Dan up for eviction when he was the HOH.

Shane takes a nasty fall in the competition and hurts his tail bone but he’s not the only one to fall, many other house guests will no doubt be hurting after this competition.

Britney wins the “safety” temptation, Boogie wins the money. Shane wins HOH and Frank doesn’t look to happy when he passes the key to him, but still believes the “Silent Six” are going strong.

Shane shows off his HOH room to everyone and the best thing he got, was a picture of his dog.

Ian goes to talk to Britney and tells her that two hours before the live show Boogie spoke to him and asked who he would put up if he won HOH, then Boogie suggested Ian put up Britney or Shane.  Britney is furious and goes to the HOH room with Dan, Ian, Daniel and Shane; she tells them that they have to put up Boogie and Frank, but Shane is worried that it will be blood on hands. Shane had all intentions of keeping his alliance with the “Silent Six” but Boogie’s conversation with Ian makes him feel forced to make a bold move in the game.

Ian gets his hair removed from his armpits from Britney, then showers and gets ready for his date with Ashley. On their date, they enjoy a pizza together that Ian made and you can clearly see that there is no chemistry between the two of them. Ashley has come to realize after this date, that the two are only friends, the feeling seems to be mutual but Ian is ready to hold her hand if Frank goes out the door this week.

Shane confides in Joe that he is thinking of putting up Boogie and Frank and Joe couldn’t be happier.

Pandora’s Box is back and it’s got some of the house guests worried.

Time for the Nomination Ceremony and as HOH, Shane has to nominate two people for eviction. Britney gets her key because of her in the HOH competition, Danielle gets a key, so does Dan, Jenn, Ashley, Joe and Ian. Boogie and Frank are shocked, they are both put up for eviction. Boogie can only smile, he is clearly shocked.

Shane’s heart is broken, he worked hard to build trust in the house and feels like he was stabbed in the back.

Find out who wins the POV and will it be used to take Frank or Boogie off the block, stay tuned Wednesday night for all the details right here on CDL.