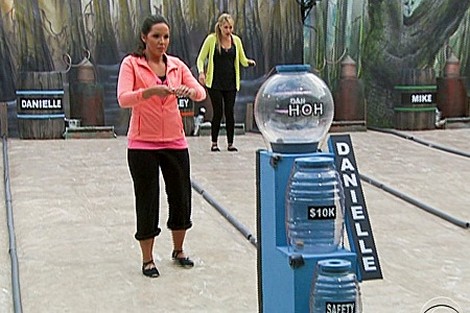 Last week on Big Brother 14, Frank had all the power, or should I say, Boogie had all the power since he is running the show. Both Joe and Wil were put up for eviction and even though Dan thought he may have been backdoored when Frank won the POV, the nominations remained the same. Boogie thinks the “Silent Six” alliance was still going strong, but that gets blown completely out of the water this week when the house gets shaken to it’s core.

In the last episode of Big Brother, Wil was sent home, if you missed the episode you can read our full and detailed recap here.

Spoiler alert: If you’re one of those people who doesn’t like spoilers, stop reading now! We have some juicy spoilers for you about the season 14 episode Week 6 episode of  ‘Big Brother 14’.

Host Julie Chen left us hanging during the HoH competition, but we’ve got all the hot spoilers and house shake up details for you.

Boogie won the 10k, Britney won the “safety” for the week and Shane won the HoH. The interesting question that this win brings up is, will Shane stay true to his “Silent Six” alliance or will there be a new sheriff in town?

Shane, Danielle, Britney, Dan and Ian discuss the nominations in the HoH room and Britney is the mastermind behind getting Shane to put up Boogie and Frank, but Ian disagrees in who should go home. While everyone else believes Frank should go first, Ian thinks it should be Boogie.

At this point, thinks look pretty grim for Frank and Boogie, but wait, looks like Pandora’s Box is back! Something pretty big is on it’s way and could it possible affect the nominations?

On to the Veto competition, the players are Shane as HoH, Frank, Boogie, Ian, Ashley and Jenn. Frank wins the POV but not without controversy, apparently he tells Boogie something about having to redraw a token and Boogie tells him not to mention it to anyone. Will Frank retain his win?