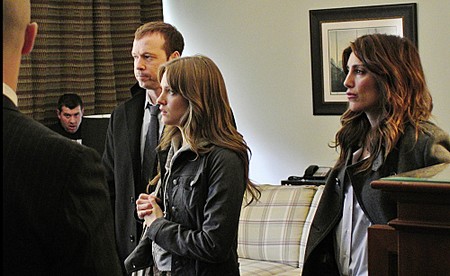 After a two week hiatus a whole new episode of Blue Bloods airs tonight on CBS and the episode is called ’Working Girls.’   To catch you up with the show – on the last episode Danny caused waves in the department when he investigated a closed case, the suicide of a firefighter, at the insistence of the man’s 12-year-old son.

Meanwhile, Jamie saved a baby from a burning building but worried it would jeopardize his undercover work when he is billed a hero in the press.  If you missed, you can read our official recap here.

On tonight’s show Danny and Jackie are assigned to protect a key witness in a Russian mob trial, but when an attempt is made on her life, they realize there is a leak on the task force. Meanwhile, Erin is offered a job as deputy mayor, which would have her working directly with her father.

Blue Bloods ‘Working Girls’ airs tonight at 10:00pm ET and we will be live blogging all the details. So don’t forget to come back and refresh your screen often for live updates. While you wait for the show – check out the sneak peek video of tonight’s episode below and let us know what you think of the season so far!

RECAP: The show begins in court with Erin at a murder trial. The accused, Mr. Denko, threatens the witness, Mr. Ostrosky  right in the court room that he is going to kill his children. Erin asks to speak to the witness, she then goes up o him and tells him not to worry but he is obviously shaken by the incident, Erin asks for a recess.

Meanwhile, Frank finds out the Erin is going to be offered the job of Deputy Mayor before she does.

It’s late at night, Erin gets a phone call at home, Ostrosky was found dead, Danny and Jackie are on the scene, but there are no witnesses.

At the station, they have brought in a girl named Sophia, they think she is also a witness and try to get the truth out of her. She tells them that she head “them” break through the back door and witnesses just when they shot Mrs. Ostrosky. Jackie tells Sophia that they are going to protect her, but Sophia isn’t convinced because of what happened to Mr. Ostroski.

Erin finds out about the offer for the new job, Carter tells her she is being offered the job because she is good, not because her father is Frank.

Frank tells Garrett that Erin was offered the job and he is not happy about it, he thinks Carter is up to something.

Danny and Jackie are with Sophia in a hotel, they are guarding her. Jackie tells Danny that her boyfriend is jealous that she is spending the weekend with Danny instead of her. There is a knock at the door, it is the air conditioner repair man that Danny called, the AC is on the fritz. Danny checks the guy before he lets him in the room, Danny starts asking him questions and Danny noticed the guy is reaching for a gun that was hidden behind the AC. Danny pulls a gun on him just in time and three get away, but they have to get off the grid if the are going to keep Sophia is safe. Danny is upset, he thinks there is a leak inside, otherwise how could that gun have been planted in the room before they brought Sophia there.

Erin meets up with Frank and they decide they are going to talk about the job offer later.

Danny calls into the station and chief is surprised that their location leaked. Jackie offers her place as a hideout, to keep Sophia safe.

Danny is at the station, eight people knew where they were keeping Sophia and he wants to narrow it down to try and find out who leaked it. Chief tells Danny that it makes him sick to think that there is an informant inside the task force. Erin comes in, she finds out what happened and is upset, she already lost one witness. Erin reminds Danny that she put Sophia’s life in her hands.

Frank is back in the office after a lecture and Garret gives him a resume, a person that is likeable and would be good for the deputy mayor job. Frank refuses the resume and tells Garrett that he is not getting in the middle of  what the mayor decides.

Jackie is still watching over Sophia who is more upset because she got a message from her mother that Denko’s people are threatening her. Jackie tells Sophia that if she leaves, Denko’s people will kill her before she even gets to the airport and the only way scum like that wins, is if she leaves.

It’s time for Sunday dinner, Linda asks Erin how it’s going with job offer and Erin confesses she doesn’t know what to do.

Meanwhile, Danny had shower at Jackie’s house and it gets a little awkward when he comes out of the shower in a towel.

At the station, the “dirty” cop is at it again, he overheard where they are keeping Sophia.

At dinner, Henry tells everyone that he is surprised that Erin is going to become a dirty politician. Frank says the Mayor is a smart guy and he hopes he knows what he is doing. Jack asks Frank if Erin because deputy mayor, does that mean he will be Erin’s boss. Erin makes a comment about the “task” force because the first location didn’t work out where they were keeping her and Frank defends them telling her that what they are doing is not an easy job.

Sophia drew a picture for Jackie, she accepts and thanks her to which Sophia thanks her in return, for keeping her safe. Two guys are where they think Sophia is being kept, something is going to go down! The two guys break in and are shocked to find out that Danny and other cops are inside, it is just a set up. Danny arrests the “dirty” cop who leaked Sophia’s whereabouts.

Erin is back at court and Denko tells her that she needs a witness to put him away, when Erin tells him that she is on her way, he says, “I hope she makes it, morning traffic is a bitch”. Meanwhile, Danny, Jackie and Sophia are in the  car on their way and they get side swiped. Lots of gun shot exchanged, but Danny gets them out of it and to the courthouse.

In court, Sophia is called to the witness stand and Denko is giving her the look of death and asks her how her mother is, then he says, her safety is up to you. Sophia is jarred, she swears in and gives her testimony.

Frank meets up with Erin after court, they sit by the water. Erin tells Frank that she didn’t mean to insult his department at dinner, he tells her that he would never stand in her way of what she wants to do, then he tells her that he couldn’t be more proud of her. Erin tells Frank that she turned down the offer, the Denko case was as bad as it gets and she knows she can make a difference, she is not ready to give that up. She also reminds Frank that a wise man once told her, “if you find something you love to do, you will never work a day in your life”.