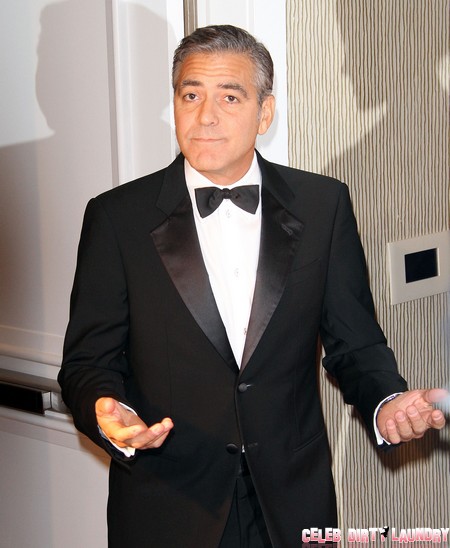 It seems that Hollywood’s resident prankster is in a bit of pickle. George Clooney, the coolest dude in Hollywood, will have to choose between two of the biggest celebrity weddings of our lifetime. A new Star magazine report claims, “[George Clooney] has to choose sides in Jennifer Aniston and Brad Pitt’s race to the altar.” Unfortunately, there won’t be any Phil Keoghan at the final pit stop. Dang, what’s a wedding without some rushing and mascara dripping? Hey, at least all of the guests will be drunk, so no-one will notice when Clooney sneaks out to attend the wedding ceremony of Angelina Jolie’s arch nemesis. There’s still no word on when these two couples are tying the knot, or whether they will be tying any knots, but the rumour mill has been churning out some of the most disastrous tales of wedding horror over the past few months.

According to Star magazine, print editon November 19, “With Jen now engaged to Justin Theroux and Brad to Angelina Jolie, both betrothed couples are trying to persuade George to attend their wedding — and not the other’s!” Pardon us if we’re going to ask the obvious question, but will these two wedding ceremonies be taking place on the same day? Why the hurry? Why the worry? Well, Star claims, “Jen and Brad are fighting over George like children. If George had his way, he’d skip both! The truth is, he doesn’t even believe in the institution of marriage, and he finds the ceremonies terribly boring.” What did you just say? Clooney doesn’t believe in the institution of marriage? Well, thank you for that lovely reminder, Captain Obvious!

The wedding plans of these celebrities have been as shadowy as Kristen Stewart’s nightly liaisons, so we’re uncertain as to why Clooney is so stressed out about ghostly nuptials.

Which wedding would you choose? Jennifer Aniston and Justin Theroux’s? Brad Pitt and Angelina Jolie’s? Let us know your thoughts in the comments below.