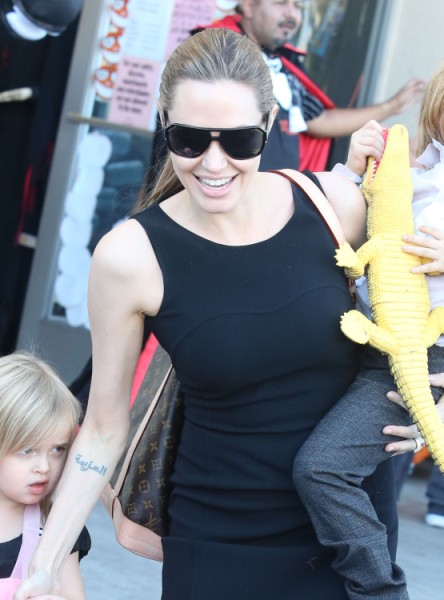 Jennifer Aniston’s a fertile, earth mother in the making! Yea! So, naturally, Angelina Jolie is a miserable anorexic who’s jealous of her children. It’s the yin and yang of celebrity gossip, people. Which one are you more willing to believe?

I’m willing to believe neither women have much in their tummys but let’s stick with the anorexic angle today. So Star magazine insists that Brad Pitt regrets proposing to Angelina because they have a “sick, twisted” relationship. Apparently she gets depressed and stops eating which gets him all concerned so he shuns the children and gives her all the attention. Is the crazy biotch always depressed then? I thought Brad liked them skinny?

She’s supposed to be down to 98 pounds and somewhere, somehow, Kate Middleton is reading this and calling Angelina an indulgent fat ass.

I have no idea how much Angelina weighs. It’s not a lot that’s for sure but she’s actually looked pretty good lately when taking the kids out to the toy shops for Halloween. Much less veiny. But Star couldn’t possibly put a happy Jen on the cover alongside a healthy Angelina. Our heads would explode from the thought!

The attention problem between Angelina and Brad is a good angle from the tabs though. It’s much more believable than the Angelina Jolie’s still in love with Billy Bob Thorton or Angelina’s Addicted to Crystal Meth sh-t they like to pump out. Those two have too many damn kids. What’s worse – an anorexic or a mother who’s jealous of the attention her husband gives their kids? I’d choose the latter. Now that’s the headline you should have next to a Jennifer Aniston pregnant story. You’re welcome Star. I just gave you next week’s idea.

Have you seen recent photos? Is Angelina Jolie anorexic-looking to you?