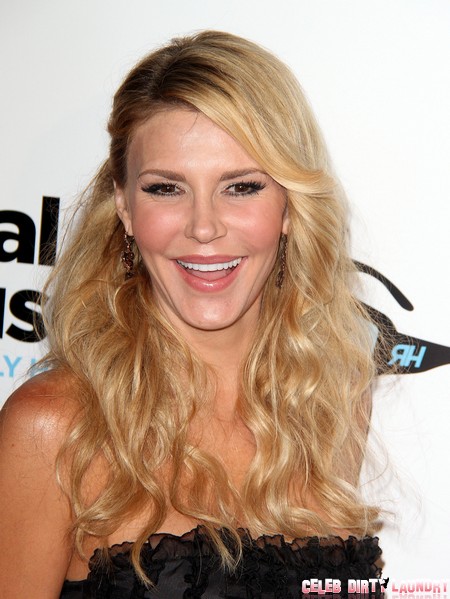 It looks like Brandi Glanville has found her golden ticket to getting through the upcoming season of The Real Housewives of Beverly Hills – she’s rumored to be hooking up with show producer, Alex Baskin!  The ex-Mrs. Cibrian may not always be the brightest bulb but when it comes to men she always seems to work some sort of magic. Moving in on a show producer is ingenious; especially when you consider the fact that last season was a bit rough for the franchise newcomer.  Radar Online has more on the reality stars strategic move saying,

“Brandi has been boasting to her friends that she has been hooking up with Alex.  Brandi says she isn’t serious about the relationship, it’s just a bit of fun, but that Alex has very, very serious feelings for her. Brandi’s co-stars, are particularly worried that Brandi’s relationship with Alex will adversely have an impact on how they are portrayed on the show on the upcoming season.  It’s just not fair to the other ladies that Brandi has been carrying on with one of the show’s producers.”

I’m guessing that Kyle Richards is not the least bit happy with this development. She and Brandi did battle through much of last season, mainly because Brandi did the unthinkable – she outted Kyle’s sister Kim Richard’s very obvious drug and alcohol problem on camera. The rest of the ladies kept quiet but Brandi was the first to state the obvious and it never sat well with Kyle who basically plays mother to her older sister Kim.  Kyle must hate that Brandi is now in bed with someone that very well may control her future with the show!

Is Brandi’s new man intended to intimidate the rest of the ladies? Do you think it’s all a mind game or did she actually kind of coincidentally fall for Alex? Tell us your thoughts in the comments below!