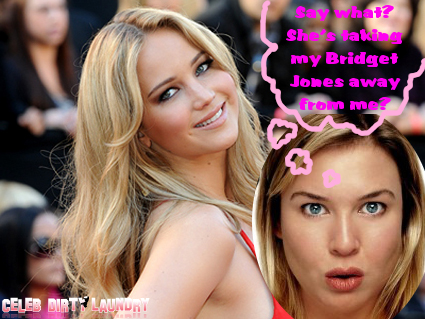 We love ya’, Renee Zellweger, but after all this Hunger Games craziness — and success — you might have to hand over your coveted Bridget Jones character to Jennifer Lawrence. Because she wants it!

J-Law, who everyone now associates with the selfless and heroic Katniss Everdeen of the Hunger Games franchise, says that she’s always dreamed of playing the role of Bridget Jones. While she admits she’d never want to take the role away from Renee, she’d definitely be up for doing a film if Renee decided she wanted to be done with them (however, we don’t see that happening anytime soon).

“I have always wanted to play Bridget Jones,” Jennifer says.“That’s the movie I put on when I am homesick, although England is not my home. When you’re feeling ‘bleh’ and you want a movie that you’re never bored of watching, Bridget Jones is that for me so it’s natural to say that I want to be Bridget Jones.”

Strangely enough, I think J-Law could fill the role of Bridget Jones quite nicely. What do y’all think?

BRAD PITT is in love with JENNIFER LAWRENCE — CLICK HERE to READ more!

Jennifer’s new film did AMAZINGLY well at the box office, bringing in an estimated $155 million (domestically). Move over Kristen Stewart and Hogwarts students, there’s a new girl in town . . . and she means business.

When asked what she’d do with her first check, Jennifer said she “wants to bathe in a pool full of pasta.”

Interesting. Yes, that is weird. But with a #1 movie to your name and a powerful Hollywood career ahead of you, I guess one’s allowed to be a bit strange. So bring on the pasta! Fettuccine or Penne?