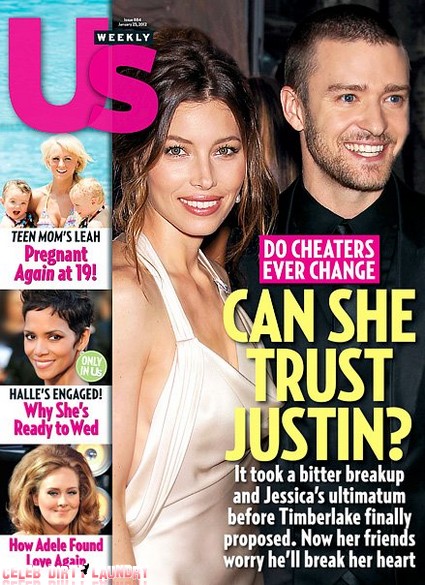 The current issue of US Magazine features the cover story  ‘Do cheaters ever change, Can She trust Justin?’  Justin Timberlake and Jessica Biel have reportedly become engaged to be married. Justin is said to have proposed to the actress last month during a pre-Christmas break in Jackson, Wyoming, after they were reunited following a three-month temporary time apart.  US Magazine is now asking if she can ever really trust Justin.  Her friends are apparently worried that he will break here heart.

Us Magazine has more:  “It took a bitter breakup and Jessica’s ultimatum before Justin Timberlake finallly proposed.  Now her friends worry he’ll break her heart.”

Also featured in this issue Halle Berry and Olivier Martinezare engaged.  The 45-year-old actress – who was previously married to baseball player David Justice for four years until 1997 and tied the knot with Eric Benet in 2001 before separating two years later – is set to tie the knot with her ‘Dark Tide’ co-star after the 46-year-old Frenchman proposed with an emerald-and-diamond ring.

A source told the new issue of Us Weekly magazine: “Halle had given up on being married, but she trusts Olivier. He makes her feel safe. He’s a keeper!”

For more on Halle’s engagement check out the new Us Weekly, on stands Friday.