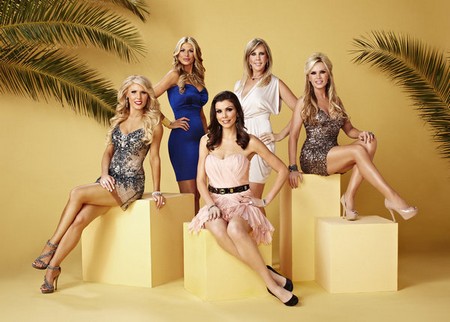 Season 7 of The Real Housewives of Orange County has been filled with lots of drama and we have been watching it and recapping it for you week by week HERE.  On this season Vicki Gunvalson, Tamra Barney, Gretchen Rossi, and Alexis Bellino welcomed new brunette Heather Dubrow.

Last week we saw part 1 of the season finale where all the women attended an extravagant party at Heather’s house. Alexis faced Gretchen and the other women for the first time since Costa Rica.

Coming up on Part 2 of the season finale “The drama continues at Heather’s opulent party in this season’s finale. Sarah’s bizarre actions force Heather to take drastic action. Tamra and Gretchen commemorate their new friendship with a heartfelt gift. Alexis’ husband, Jim, crashes the party and confronts Heather’s husband, Terry, about calling Alexis phony. Meanwhile, Brooks instigates an explosive fight between Vicki and Tamra that leaves the future of their friendship in doubt.”

Insider Tip…Heather Dubrow kicks friend Sarah Dubrow out of her house in this episode.

The kind folks over at Bravo TV have provided us with this cool gift pack for one (1) of Celeb Dirty Laundry’s lucky readers to celebrate the season 7 finale of The Real Housewives of Orange County.

HOW TO ENTER:  Tune into Part 1 of The Real Housewives of Orange County season finale on Tuesday June 26th, and answer the following questions in the comments section below:

1) Who will be the best man at Tamra’s wedding?
2) Which two guests decide to rejoin the party for Heather’s announcement?
3) Which Housewife finds a Diamond in her Champagne?

You can also gain an additional entry via twitter, by following @CelebDirtyLaund and tweeting the following: “I’m watching Pt. 2 of the #RHOC finale Tues on @BravoTV at 9/8c because _____ plus chance to win at https://www.celebdirtylaundry.com/2012/cdl-contest-the-real-housewives-of-orange-county-giveaway/“.  (Don’t forget to fill in the blank with why you’re watching!)

DEADLINE TO ENTER: The contest closes Wednesday June 26th, 2012.  You must be 18 years of age and a U.S. resident to enter. (Make sure to include your e-mail with your entry so we can contact you if you win)

DISCLAIMER: This prizing was provided by Bravo, but Bravo is not a sponsor or administrator of this giveaway.

WINNER OF THE The Real Housewives of Orange County season finale  – Bria56 From Scranton, Philadelphia