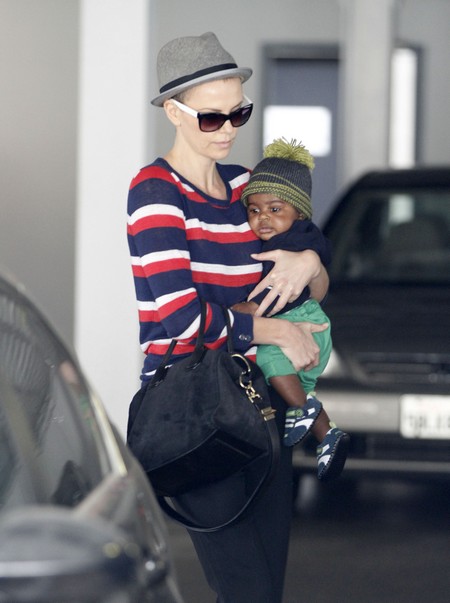 Charlize Theron shaves her head for work as any dedicated actress would. Well Maybe. It’s been awhile since we’ve heard word on the sequel to the Mad Max franchise, and Charlize Theron’s prediction of shooting happening soon, can now be confirmed, because this hotty hot hot, shaved her head to play her character Furiosa in Mad Max: Fury Road.

A rep for Charlize did confirm that this new look is indeed work related. Here in the picture, you can see Theron wearing a fedora, but the shaved head is really noticeable and the thing is I guarantee she still looks as hot as ever even with a shaved head.

For those of you who have no idea in hell what Mad Max is then let me briefly tell you what it’s about. Right now this is the fourth installment being made in the franchise; it’s an action film taking place in a post-apocalyptic Australia.

Max Rockatansky was portrayed by Mel Gibson in the originals, so this means that Tom Hardy who is now taking on the role, has a lot of work and to live up to the name of Mad Max since Mel Gibson is an extremely talented actor.

Greg Miller who’s directed all the films so far said that Mad Max 4: Fury Road isn’t all they’ve got; he’s also started to do a second and third story. The script for the second has been completed and the third is soon to be finished, as you can tell we’ll be seeing a lot of Mad Max in the future.

I just want to finish this with damn Charlize Theron is hot and a very talented actor, Snow White and the Huntsman was a really bad film but it wasn’t her fault, her acting was superb in it, it was the other actors that were the problem, especially Kristen Stewart who I think ruined it.