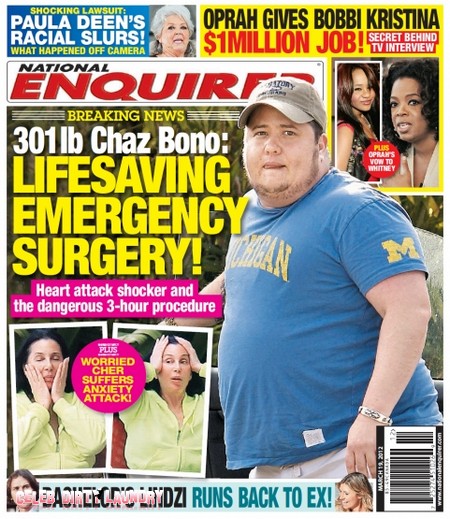 The cover of the March 19th, 2011 edition of the National Enquirer reveals that Chaz Bono has suffered a massive heart attack and had emergency surgery to save his life.  At 301 pounds Chaz was literally a heart attack just waiting to happen and according to our friends at the Enquirer – it did happen!  Cher was so terrified by the 3 hour emergency surgery that was required to save Chaz’s life that she suffered a massive anxiety attack.   We will follow up with all the details later in the week but obviously Chaz needs to get his appetite under control before it is too late.

The cover also reveals that Oprah the vulture paid $1,000,000 to Bobbi Kristina to secure the opportunistic interview with Whitney Houston’s bereft daughter.  Oprah apparently managed to get Bobbi Kristina to discuss details of Whitney’s tragic death right on TV – how disgusting and disrespectful.  Especially since it was well known that Whitney hated Oprah.  I guess Bobbi couldn’t say no to the money and the fame – shame on her!

The Enquirer also claims that Davy Jones of The Monkees didn’t have to die!  Could the celeb have been saved?  We will find out when the print edition is released later in the week.

Also covered in that a broken-hearted Lindzi, of The Bachelor, runs back to her boyfriend.  I mean who can blame her?  With a moron like Ben Flajnik choosing Courtney the slut what choice does she have?

The cover also claims that Whitney says that she will save Bobbi Kristina – let’s hope she does a better job than she did with Whitney.  Whitney appeared in a famous interview on Oprah when she was desperate for cash and attempting to reboot her career.