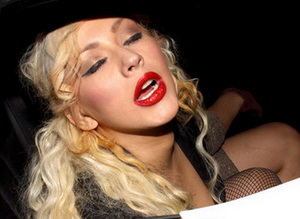 Prepare to be shocked CDL readers… Christina Aguilera hates tabloids and blogs!  The judge/coach/mentor/performer on The Voice recently commented at a music conference for Billboard and the Hollywood Reporter about her feelings toward these entities.

“Now everyone is a critic.  I don’t read blogs. It’s just God-knows-who in Buttf— wherever writing hate sh–. You can’t take it seriously. I’m sure you’ve all been hated on at some point by buttf— people.  It’s real talk today.”  She goes on to say that blogs are just rumors and trash and she refuses to read any of it, which begs the question: If you don’t read, then how do you know it’s just rumors and trash?  Pictures and blogs depicting you drunk as all hell are not rumors, they are facts with evidence.

Of course everyone is a critic, Ms. Aguilera.  Critics are who keep you relevant.  Critics are fans and haters alike.  Blogs are outlets for everyone to voice their opinion on EVERYTHING.  Yes, it’s true not everyone will be a fan of what you do.  Remember Stripped and Bionic?  Because I am actively trying to forget those.  Keep the saying in mind “any publicity is good publicity.”

You seem to forget that you are a public figure.  I don’t believe I’ve read much about you being a horrible mother or daughter or friend, because that is your private life.  Your public persona however, is a whole different ball game.  When you were on Chelsea Lately sans panties and proclaimed that you had “p***y power” of course that was going to get attention and the message boards going.  When you portray yourself as a diva and an attention whore then the media, your fans, and your foes are going to go on the attack and call you out.  Look princess, everyone is entitled to their opinion and if they want to share it then I want to hear it.