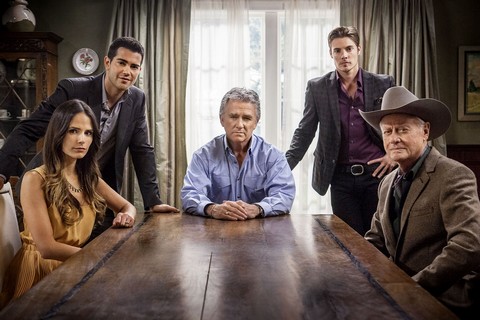 When Dallas returns in late January, there will be shakeups, makeups and break ups for sure. What’s not certain is whether Larry Hagman’s death was already written into the show. If he knew he was not long for this world, they may have already written in and shot death scenes. This is common when shows work with older actors, so it wouldn’t be surprising if Dallas had done this.

Here’s what we know and here’s some things we’re hoping for. Elena’s brother Drew will be joining the cast – played by the hunky Kuno Becker – a spicy Mexican film star who’s easily as good looking as the Ewing boys… He’ll be on the scene by Episode 4 of Season 2!

Also new will be female player Emma Brown (played by Emma Bell – most recently from The Walking Dead) who is said to be beautiful, wealthy and raised during European travels by her grandparents. Rumor has it that she’s Ann Ewing’s mystery daughter that she doesn’t like to talk about. Ann has also not seen the last of her rotten ex-hubby. Looks like Harris Ryland will be a season 2 regular which should make for more fun tension!

The big questions will revolve around Larry Hagman’s JR character. They were already shooting season 2 when he passed, and word was that Hagman had already shot most of his Season 2 scenes when he lost his battle with cancer. It is reported that JR Ewing’s death and funeral will occupy one full episode of the series which will be dedicated to Hagman, but I would also expect to see a memorial notice to him on the first episode of Season 2 as well.

Season 8 is the rumored death episode which will air March 13, 2013. They have had to rewrite Season 2 extensively once Hagman’s health deteriorated. JR’s funeral is anticipated to bring back loads of characters from the original series. Producers had been begging Victoria Principal to reprise her role as Pam Ewing, but she wasn’t budging. When Hagman passed, producers changed their tactics and asked her for a guest spot on the funeral episode. No word yet if she will appear. Her IMDB page is still not showing a guest spot on the series…

I don’t know about you, but I was over the moon when the Dallas reboot was announced and I absolutely loved Season 1 – my only complaint was that it was a short season. And I’m feeling bittersweet about Season 2. I’m thrilled it will be back in just over a month, but am sad to know that Larry Hagman is gone and JR’s appearances will be his last.

Join us here on Monday January 28, 2013 for a special Season 2 premier double episode of Dallas. We’ll be recapping and commenting live here for the full two hours!