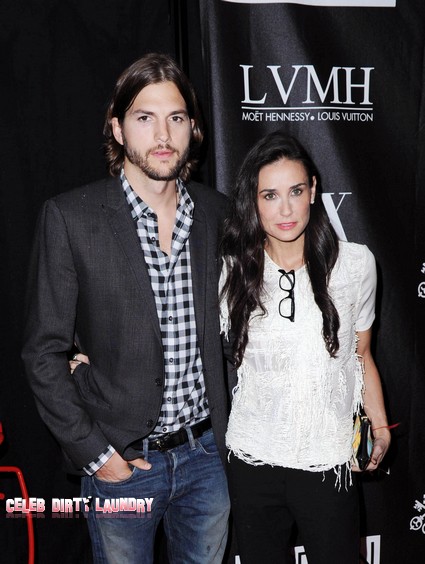 Demi Moore and her estranged husband Ashton Kutcher have been spending time together at her Benedict Canyon home and elsewhere praying for Demi’s to sober up. It seems that Ashton was photographed going to her Benedict Canyon estate on Wednesday and sources say they met previously following her hospitalization for her drug overdose. But according to Radar’s source, the couple that pray together don’t necessarily stay together:

“This has been a very hard time for Ashton. He loves Demi very much, and he feels absolutely helpless right now,” a source close to the situation tells RadarOnline.com. “Ashton and Demi have been praying together at her house, and he mainly just wants to provide comfort to her right now.

“This absolutely isn’t a reconciliation, but there is still a lot of love there and he would never turn his back on her — it’s just not who Ashton is.”

Ashton took a lot of heat for appearing not to care much about Demi following her drug and anorexia induced medical emergency but now it appears he really is concerned with the middle-aged celeb. Upon his return to Los Angeles Ashton ran to get guidance from religious advisers at the Kabbalah Center in Beverly Hills in order to learn how he could best help Demi.

The source continues:  “Ashton has had loved ones in his life that have dealt with addiction issues, and he realizes that it’s counter-productive for someone to be forced to go to rehab,” the insider says. “Ashton knows the addict has to want to get help for themselves. There is a lot of noise around Demi right now, and Ashton wants her to know he is there for her and supports her no matter what.”

“Ashton absolutely wants her to get help for what he thinks is the biggest threat to her health, anorexia, but Demi just isn’t ready to take that next step yet.”

Meanwhile it was revealed by TMZ that just 9 days before her whip-it induced medical emergency Demi partied hard under the radar at Miley Cyrus’ penis cake BF’s birthday bash in L.A. More evidence of Demi desperately clinging to her fading youth.

Whatever people want to say about Ashton and his contribution to Demi’s demise the blame rests primarily with Demi herself. When a soon to be 50-year-old (Demi turns 50 this November) insists on partying with, and behaving like 20 year-olds, then her outcome is assured to be Nothing Nice.