Demi Moore Escapes From Rehab To Take A Vacation 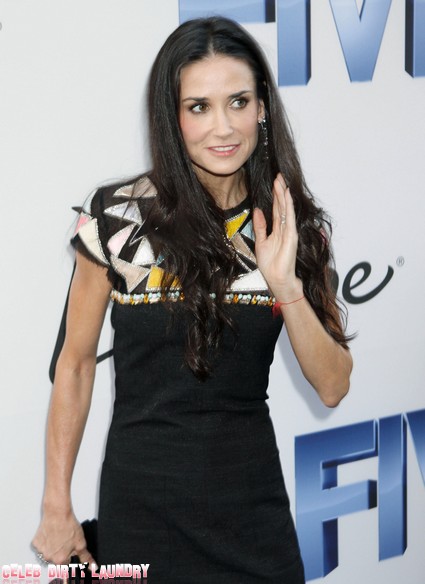 Demi Moore has been in rehab for a mere few weeks and has now busted loose and taken off on holiday. This shows just how out of touch Demi is with the seriousness of her condition. Demi Moore was rushed to the hospital after going into a drug-induced seizure while partying at her home with friends and her daughter Rumer Willis. Anorexic and addicted to pharmaceuticals, party drugs, and Red Bull, she thinks that with a sober couple of weeks under her (tiny) belt that she is all better. It is one thing to stay clean and sober in a locked-down secure rehab facility but another thing entirely to deal with the outside world and its temptations. Demi has tons of money and an entourage of enablers and panderers – just like Whitney Houston did.

We wish Demi well but we are certain that she has left rehab way too soon – a person in her advanced state of anorexia and with her serious addiction problems requires months of treatment – not weeks. The problem that these celebs face when they have addiction problems is that most of their people just want to please them. What happens is that these celeb addicts surround themselves with the sort of people who just don’t have the balls to stand up to them. It often costs them their lives. Look at Michael Jackson, Amy Winehouse, and Whitney Houston if you doubt this. They got what they wanted in the short term from people who didn’t care enough about their well-being.

BANG Reports:  Demi Moore has left rehab. The troubled actress has reportedly checked herself out of Utah’s Cirque Lodge facility – where she was rumoured to have been receiving treatment for “an eating disorder and addiction issues” – to go “on vacation” at an undisclosed location.  A source told E!:  “She’s in no rush to get back to L.A. She’s on total lockdown and only talking to a small group of people.”

Demi – who was hospitalised in January after suffering a seizure – was recently said to be taking her recovery very seriously.
A friend previously explained: “She is totally committed to getting better.  “Demi has a long way to go, but she is getting better. She has many days where she feels great.”

Last month, Rumer Willis – the 49-year-old star’s eldest daughter with ex-husband Bruce Willis – revealed Demi, who split from husband Ashton Kutcher in November amid speculation he had cheated on her, is on the “road to recovery” and insisted the whole family “believe in her”.

The 23-year-old actress said: “Of course the situation weighs heavily on me. “My mother is on the road to recovery. It’s slow going but we believe in her.”

So where do you think Demi really is? Do you trust her friends to take care of her – the same gang who were partying with her when she collapsed? Are Demi’s chances for recovery and health much worse now that she has left rehab prematurely? Let us know what you think in the comments below.