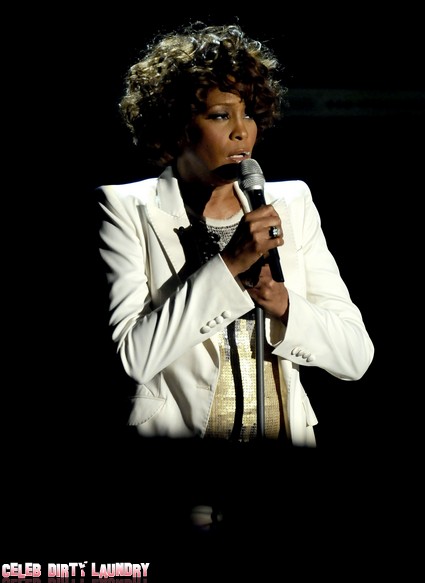 Apparently the taking and release of Whitney Houston‘s death scene photos is really bothering her mom, Cissy Houston, and she is trying to muster up some serious law enforcement involvement to catch the thief/snapper/leaker. A famous photo of Whitney in her open casket was published by The National Enquirer but that does not seem to be upsetting Cissy and the family to the same degree. This could be because that photo was taken on the family’s watch – during a private family viewing – and the funeral home was apparently not responsible.

What strikes me here is the futility of the misplaced anger of Cissy and the rest of Whitney’s family. Photos get taken when things happen to big celebs – that is a fact of life – and in the end does it really matter? Why is Cissy not screaming about who allowed her daughter to party, drink, and drug herself to death? Whitney’s entourage of leeches and panderers watched her deteriorate and ultimately die as they did nothing serious or effective to save her from herself. Now they are worried about who took pictures? Pathetic.

RadarOnLine has the scoop:  Whitney Houston’s family, spearheaded by her mother, Cissy, is asking law enforcement to look into death scene photos that were leaked to the media in the days after the pop superstar died at the Beverly Hilton Hotel, including one pic of her body being wheeled out on the gurney in a body bag, RadarOnline.com is exclusively reporting.

A few days after Whitney passed away on February 11, a media outlet (not RadarOnline.com) published a photo of Houston in a body bag on a gurney being taken out of the hotel. The entire floor was on lockdown, and the area was secured by the Beverly Hills Police Department. There is surveillance video from the hallway of the person who took the picture of Whitney in the body bag, and the Houston family wants to know who it is and have asked for an investigation into the leak of the photos. The Houstons have been told by cops that after her case is officially closed, they can look into the matter.

It might not be the the Beverly Hills Police Department that would handle that, but this is very important to the Houston family to know. “They need and deserve to know who took the pictures, and if the person profited from it,” a source close to the situation tells RadarOnline.com.

As we previously reported, Houston, 48, died after consuming a fatal mix of Xanax, Valium and alcohol on February 11, just hours before Clive Davis’ annual pre-Grammy party at The Beverly Hilton Hotel.  Some staffers at the swanky hotel were fired after they gave interviews or spoke to media outlets after Houston’s death.

“The hotel employees that talked to the media were fired because they violated hotel policy,” a source told RadarOnline.com. “They weren’t high level employees, but the hotel didn’t want anyone to talk about Whitney’s tragic death.”

There were tremendous efforts made when Houston’s body was removed from the Beverly Hilton Hotel to shield prying eyes and cameras from getting a picture of her body on the gurney. “Whitney’s sister-in-law, Pat, spoke with cops that night when she died and with members of the coroner staff. They told her they were going to ensure that no one was going to take a picture of her body on the gurney. The family was so and continues to be so grateful to the Beverly Hills Police Department for everything they have done and the professionalism they have exhibited during the aftermath of Whitney’s death. It was naturally heartbreaking to the family when the photo was published, but they trust that the person who took it will ultimately be held accountable,” the insider says.

What do you think about this issue? Is the problem really photos or is it how Whitney was allowed to destroy herself? Britney Spears’ dad Jamie Spears, took charge and had his daughter placed under conservatorship when she was spinning out of control. Today she is happy and getting married soon – most importantly, she is alive! Amy Winehouse’s parents did no such thing for her even though she was obviously losing it – and today she is dead. Why didn’t Whitney’s people step in and save her? Now they are yelling about photos… shut up.