BY Kinsley Goldman on May 7, 2012 | Comments: one comment
Related : Dancing With the stars, Dancing With The Stars Season 14, Donald Driver, Performance Videos, Reality TV, Recap 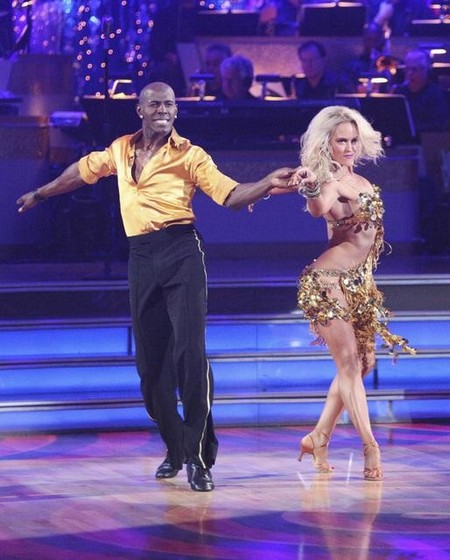 Donald Driver danced the Waltz tonight for her first dance as Dancing With The Stars continued with its eighth episode.  The competition is really heating up as the remaining six couples hit the ballroom tonight with two rounds of competitive dance performances, a ballroom dance and the Trio dance — both of which will be a style that they’ve not yet performed.  We recapped the tonight’s show for you and if you want to see how all the couples did go HERE!  Did you see Donald’s performance last week if you missed it you can see it here!

Donald Driver and professional dancer Peta Murgatroyd, dancing the , Tango –Peta had this to say about their dances this week, “It’s going to be very interesting and it’s going to be kind of a stressful week, I think. We’ve got two dances and we’ve got to be able to pull off both of them. We’ve got another pro, though, to help out so it’s going to be good.”  Donald said it might take 2 to tango but it is going to take 3 10’s to win the mirror ball.

Judges Comments:  Len: Ding Dong Donald a first round knockout. You set the standards you set it high great job . Bruno:  Beware of the killer stilettos, when fatal attraction turns into bloodshed. I thought I was going to have to call a marriage counselor, talk about aggression.  Carrie Ann: You are in the zone you are so focused. I saw much more vocabulary movement, this was tight. My advice to you is just a little more drama.