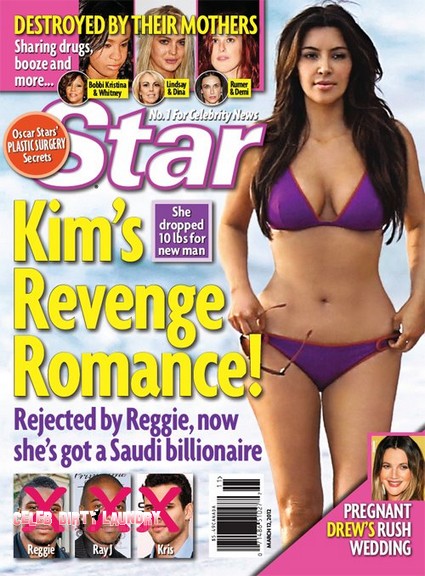 The March 12 issue of Star Magazine features the cover story of how Kim Kardashian is slobbering all over a Saudi Oil Billionaire after being dumped by Reggie Bush. I guess if Kim can’t be happy and with her true love Reggie Bush then she at least wants to be a billionaire! This would explain why the famewhore is having a ‘revenge romance’ with an as yet unnamed Saudi billionaire. Remember when Kim and her mother, Kris Jenner flew off to Dubai? Well that could have been when Kim made carnal contact with Mr. Sheik. After all, her marriage to Kris Humphries was falling apart at the time as we saw on her reality TV show. In fact there was a whole scandal about the legitimacy of the Dubai episode of ‘Kourtney and Kim Take New York’ and especially the ‘heart to heart’ between Kim and her mom – Humphries claims it was faked.

More: Kim Kardashian Dumped By The Love Of Her Life Reggie Bush (Photo)

Kim would do well to hook up with the Saudi billionaire – after a little while we would expect Ms. Kardashian to be the first female leader in the Arab world – with momanager Kris as Minister of Finance! Run Sheik run! – save yourself!

Hollywood Life quotes Star:  “Several royals gave her their phone numbers and made it clear they were serious about dating her,” a source tells the mag. “The one she really had a connection with is a billionaire!”

While her prince’s identity has yet to be revealed, sources tell the mag that he’s not hesitant to dole out cash which is exactly what she was looking for in her next man.  “She wants to be taken care of,” the source says. “She’s done being a sugar mama.”

Kim Kardashian might like the money that the billionaire has but could she handle to obscurity that comes along with being a good Muslim wife? Of course the Shiek might be able to stop Humphries from revealing all of Kim’s dirty little secrets.

The Star cover also promises to expose the terrible drinking, drugging, and partying to which certain Hollywood moms have subjected their poor innocent daughters. Yes – you guessed it – Whitney and Bobbi Kristina – Dina and Lindsay and of course, Demi and Rumer.

Can you see Kim K married to an Arab Sheik? Haj Kardashian?? Can you see the Sheik having Kim beheaded for infidelity? Sound off in the comments below.