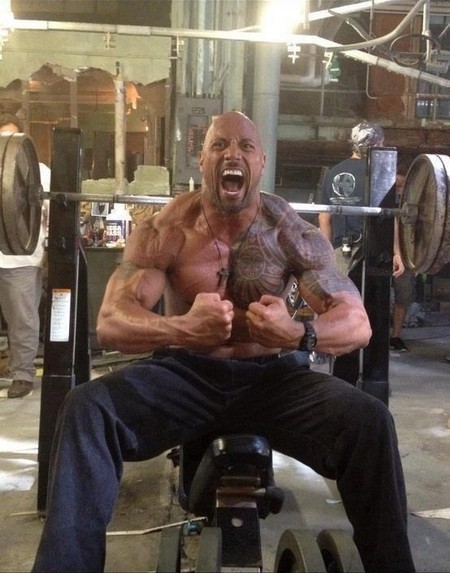 Dwayne Johnson AKA “The Rock”, was able to put his athletic skills to use in East London recently while on set filming The Fast and the Furious 6.  It seems there was a group of burglars wearing hoodies that attempted to break into white, padlocked vans owned by the films production crew.  The Rock spotted the gang and just so happened to already be dressed for action, wearing a bulletproof vest, combat gear and carrying a faux FBI badge.  He sprung into action and chased the startled group from the vehicles that held thousands of dollars in equipment, basically saving the day.

A source told The Sun: ‘It was so funny. The Rock looked like an action hero because he had his flak jacket on and an FBI badge in his hand. All of a sudden there was loads of gunfire and this giant dressed as a copper was about to mow them down.  The lads jumped out of their skin and scarpered down the canal path and left the crew in peace.’

Does The Rock look like an action hero or does he just look like a steroid freak?  I mean seriously, look at that photo.  If you’ve ever been around anyone that has used roids’ then you know it to see it on another person. Those muscles are not naturally sculpted in the gym, he has help. Lots of help.

I’m glad that he put those muscles to good use and did something good for the crew but enough with just praising this guy for his magical strength. If he wasn’t resorting to drastic measures (such as steroids) then he would just be another gym rat and a healthier one at that. Do you like the way The Rock looks?  Should he cut out the roids’?  Tell us your thoughts in the comments below!

See The Rock at different stages of his ‘training’ cycle – about as natural as Sylvester Stallone – funny how Lance Armstrong was vilified but The Rock is adulated.