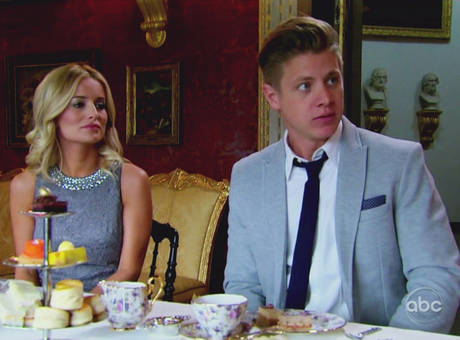 It looks reality TV has proven once again that it rarely delivers happily ever after. Just days after Bachelor couple Ben Flajnik and Courtney Robertson called it quits, seemingly happy Bachelorette duo Emily Maynard and Jef Holm break up!

Despite photo ops to the contrary, Reality Steve says, “I can tell you right now that Jef and Emily broke up this weekend. Done. Over. No longer engaged.” Steve says his info is verified and first hand and that official word will be breaking soon.

Was there a sign we missed? The normally Twitter effusive couple have stopped referencing each other – Emily last tweeted about Jef on September 19th. Since then it’s all been about daughter Ricki Hendrick, mani’s and handbags.

On Jef’s end, he last tweeted a week ago “Never going to stop falling in love with this babe” but then tagged an old, inactive Twitter account of hers. Then a few days ago Jef tweeted cryptically, “What comes easy wont last. What lasts won’t come easy.” Hmm… is finding love on reality TV easy? Maybe. It’s certainly not easy to make it last judging by the Bachelor and Bachelorette franchise track record.

If the lovey-dovey duo are in fact done up as Steve says, the reasons for the break-up could be myriad. Emily has been plagued with cheating rumors practically from the moment the two got engaged. First there were the persistent allegations that she slept with runner up Ari Luyendyk just prior to Jef presenting her with a ring.

On the Bachelorette reunion show, insiders said producers cut Ari accusing her of breaking his heart and yelling, “You just slept with me!” After that, news of sexting between Emily and a mystery man made the front page of US Weekly in late August.

The mystery man was purported to be Oakland Raiders QB Matt Leinart and sources say Jef confronted her about explicit texts between the two he’d found on her phone saying, “You’ve been f**king cheating on me for months! Pack your s**t and get the f**k out.”

Was this the beginning of the end? Perhaps the straw that broke the reality relationship was last week’s In Touch story accusing Holm’s Mormon family of practicing polygamy. Holm lashed out on Twitter in defense of his family, but has made little mention of his fiancée – if that is in fact what she is anymore.

The pair have been denying break-up rumors, but have quieted their denials in the past few days. Reality Steve is insistent about the split saying, “I know what I know, and they’re done.” This news was statistically inevitable – out of the Bachelor and Bachelorette series, just three of the many, many couples have made it over the long haul…