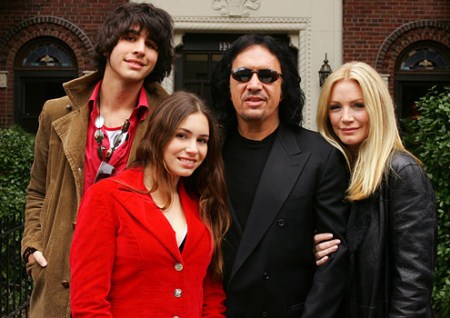 Gene Simmons is back tonight with new episodes of Gene Simmons Family Jewels. Tonight is a double episode – episode 5 is called ‘Pregnant Pause’ and episode 6 is called ‘The Demon Must Be Crazy.’  Stand by as we live blog both episodes with all the up-to-the-minute details.

On last week’s show Shannon approached her daughter Sophie about the adoption.  Sophie wouldn’t answer texts or calls from Shannon because she clearly upset about the adoption. Meanwhile, Gene was talking to a friend who advised him that when Sophie and Shannon meet, he should be there, so he joined them.

Gene walked in on Nick and brings an inflatable KISS chair with cup holders and was surprised to see that Nick had guests; four girls. Nick told Gene that the four girls were just his room mates and although he wasn’t dating any of them, Gene was extremely proud. Typical Dad!  If you missed last week’s episode you can read our full and detailed recap HERE.

On tonight’s show to distract Shannon from adopting, Gene suggest they go on an overdue honeymoon. Shannon surprises Gene by picking a shocking location, Africa, meanwhile Tracy has baby plans of her own.  Shannon uses the African trip to get Gene’s mind back where she wants it, adoption!

Tonight’s episode is going to be another exciting one that you won’t want to miss, so be sure to tune in for our live coverage of the show tonight at 9PM EST!  While you wait for our recap hit the comments and let us know what you think of season 7 of Gene Simmons Family Jewels so far!

RECAP: Sophie tells Shannon that it’s not the right decision and believed that she spent most of her time with them when they were kids, so it’s not fair to Gene. Sophie asks if Gene really wants this kid? Offering her to volunteer to help out kids instead of adopting one. Shannon then talks to her therapist with Gene and talks about how Sophie told her that her and Gene should just live together and learn how to live with one another first, Shannon makes it clear she’d still like to adopt but not sure if it’d be possible. Shannon is talking with her sister about Sophie and how it went with talking to her, her sister reminds her about her embryo she still has and asks Shannon to go with her to the fertility specialist. Shannon tells Gene about the whole thing and tells him what if she adopts a baby, Gene says that agrees it would be in support of her sister and Shannon says she’s jealous and wish she could just have a baby.

Shannon is talking to her sister again and says that if she was pregnant then nobody would be able to say anything, her sister says that they’re being mean not thinking of her or of this adopted child. Her sister mentions that if she wasn’t married she could just adopt tomorrow. Sophie visits Nick’s place and says that inflatable Kiss chair doesn’t fit with the whole castle like look, Nick tells Sophie that she should go through with the interview too state her opinion on the matter so she can realize they don’t want to do it. Shannon’s sister comes over and says that she will give her the embryo since she herself is a single mother and can’t handle another child. Shannon brings up the proposal from her sister to Gene and Gene right away says that it’s too much, asking what happened to the adoption. Gene just doesn’t know, he’s incredibly shocked and says he doesn’t like the whole idea of her caring someone else’s baby. Shannon’s sister comes over and then says that she has been having nightmares about it and lovers her, but she can’t give up the child.

Shannon says she appreciated her offer and knew she was trying to make her happy, telling her she is perfectly fine with it. Gene says he wants to talk to Shannon and she is very upset and he doesn’t want to talk about it but wants to mention that he believes the whole adoption thing is stressful and is offering a way to relieve it. Gene says the he and Shannon can go away anywhere she wants, Shannon is now getting into high spirits. Shannon believes he will complain, but he says that he wouldn’t. Gene says that the honey moon will be a distraction from the adoption, hoping that it will bury her ideal about it. But the therapist tells him that it will in no way complete get rid of her thoughts for adoption, Shannon is now planning out where she wants to go. Shannon is planning on going to Africa, Shannon breaks the news to Gene and he is get his vaccinations for traveling and he’s screaming every injection at a time.

Nick asks why he has peas on his arm and says it’s because they’re going to Africa and he asks if they aren’t just planning to do a Branjalina while they’re there, Nick walks up and lifts the peas of Gene’s arm and smacks it. Gene is talking to a friend and he says that Gene is going to want to hang himself, Gene planned a meeting between Shannon and jewelers hoping it could distract Shannon once again. Shannon talks to her sister about how Africa is for him to see the children there and make him agree with the adoption, the two arrive at the airport ready to leave. Shannon makes them have separate seats, he sits down and asks if he can have cookies. Shannon and Gene arrive to Africa and he’s amazed by the view, announcing he’s the king of the world.

There were children from neighboring villages who performed some dances and singing for the two and Gene said he was really into it and started dancing with the kids, he really enjoyed it. Gene asks how Shannon was getting a signal in Africa and was expecting they would be staying in a tent, Gene refuses to wear the safari hat but the very next day he’s wearing it. Gene was really paranoid on the safari and accused a giraffe of giving him the finger, the safari guide was telling them about the lionesses and Gene was terrified when one walked near the jeep. The guide mention that they should get out of the car and Gene completely disagrees, Gene says he has to take a leak and is nervous with all the animals around and decides to hold it. After the safari Gene and Shannon are brought to a tent which is also told is there new home.

A guide tells them not to leave the are because they’d get into the animals territory, Gene is afraid and isn’t safe with leaving the tent. Shannon sneaks up to Gene using the outdoor shower and completely scares the hell out of him, Shannon and Gene will be eating up in a tree house. Gene is informed about how in Africa you can have more then one wife, Shannon warns him that it wont be the lions he’ll fear for tonight. Gene starts getting paranoid and keeps looking outside to see if there is anything outside and once again Shannon scares the hell out of him once again, Gene wakes up scared in the middle of the night thinking he heard a sounds. Gene and Shannon are out with a guide and gets a good a sight of the lions, the guide tells Gene and Shannon get out of the vehicle to look at the lions closer. Gene and Shannon get to dinner for them both and there’s a man with a gun standing nearby just in case, Shannon mention how the animals adopt other young who’re abandoned. Shannon now mention the she and Gene will be going to Zambia, once again Gene starts getting frightened because of the lion sounds in night.