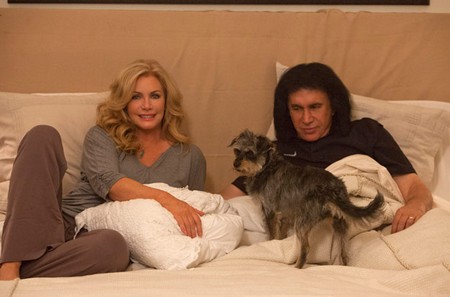 Gene Simmons is back tonight with new episodes of Gene Simmons Family Jewels. Tonight is a double episode – episode 3 is called ‘Where’s Sophie’ and episode 4 is called ‘Cold Front.’ Stand by as we live blog both episodes with all the up-to-the-minute details.

On last week’s show Gene and Shannon discussed their adoption plan and helped Nick prepare for his future. Shannon tells Nick she wants him to “get a life,” since he always wakes up after noon. Shannon was really into adopting a child, but Gene is not sure about it. He is not sure he wants another child. Gene and Shannon saw a therapist.

The therapist counciled Shannon and Gene to tell Sophie and Nick about the adoption. They tell Nick and Sophie and they seem okay about it. Gene is definitely having second thoughts. If you missed last week’s episode you can read our full and detailed recap here.

On tonight’s show as Shannon awaits the official interviews with the adoption agency, she worries that her family will sabotage her plans. Sophie is so upset she disappears and refuses to return any of Shannon’s calls. Later, Shannon confronts her about her attitude.

We will be live blogging Gene Simmons Family Jewels with all the up-to-the-minute details at 9PM EST so make sure to come back to this spot and watch the show with us. Refresh often to get the most up-to-date results!

RECAP: Shannon and Gene get home and are looking for the kids but none of them are there, Sophie is gone and Nick has moved out already without mentioning it to them. They try to call Nick and he doesn’t pick up, the two talk about it with their therapist. Upset he didn’t mention anything about moving out, Shannon try’s to call Sophie once again and she does not pick up. Gene goes over to where Nick is now living, bringing a Kiss inflatable chair that has cup holders. Gene finds out Nick is staying with four other girls and asks which one he’s bumping with, Gene tells Nick he’s proud of Nick for living with the four. Shannon comes in and is surprised about the four roommates as well, Robyn from the adoption center comes and inspects the house. Nick comes in and hears about the foster child and calls it the replacement child, sarcastically saying “didn’t know we’re still doing that.”

Robyn tells Shannon that she wants to do individual interviews with the whole family about the adoption, Shannon once again calls Sophie and she does not pick up. Shannon tells Gene about the whole thing between Nick and what he said in front of Robyn, Shannon asks Gene to talk to Nick about the interview. Shannon tells Nick the he’ll have to go through an interview and Gene tells him that he may have given the wrong impression, Nick says it was the right one. Nick says he’ll contact Sophie and tells Gene he’s saving Shannon from a very big mistake. Shannon talks to the therapist about the family interviews, Gene says he’s going to let the children to be up front. Shannon is worried that either Gene, Nick or Sophie will say something and they agency wont let them adopt. Gene says he’ll let the children be his shield and let them say all they feel about the adoption so he wont. Nick contacts Sophie about the interviews and she says she’s got to go to work and hangs up, Shannon is worried about Sophie not answering.

The interviewer has arrived, Gene and Shannon comment about one another and their qualities for the adoption of a child. The interviewer asks Gene how does he feel about the adoption, Shannon is very nervous about what everyone else will say in the interview. Gene says that he believes that Shannon did a great job with her first children so she’d be prepared for another. Nick says that it’s not a good idea and that the adoption is only an impulse that wont last, he says because he and Sophie are gone doesn’t mean you just get another one. Shannon calls Sophie and she once again doesn’t call again, Nick says that the child will be put right into the spotlight and that it wouldn’t have a choice. Nick tells Shannon that Sophie isn’t happy about the interviews and Shannon is very upset about Sophie ignoring her. The therapist asks Gene about the interview and Gene says that he didn’t want to hurt Shannon and Nick was straight forward and Sophie’s absence was pretty much her answer. Shannon took a plane to Whistler to see Sophie because she can’t handle the silent treatment she’s receiving.

Shannon is talking to the therapist about Sophie’s reaction to the whole adoption idea, Shannon arrives to Whistler and meets Sophie outside and tells her they need to talk. Sophie tells her that she has to go to work, Sophie is trying to avoid the whole subject. Gene and Nick say when Sophie is upset at you she does the devil look. Shannon goes inside and sees her boyfriend Nick and asks him about Sophie, he tells her she’s incredibly upset and even avoids the subject with him. Gene’s friend comes over and talks about Shannon leaving and his friend tells him that he should of went and it’s wrong he didn’t, Shannon try’s to call Sophie at work and once again ignores the call. Shannon invites her to meet up with her to eat out with her, Shannon goes to the place she said they should meet and once again Sophie doesn’t arrive. Shannon makes Sophie and Nick breakfast and Sophie is still giving her mother the silent treatment and Nick leaves to get ready for work. Gene is walking up the steps to the house, Shannon wants to talk to Sophie but she doesn’t want to at all.

Gene arrives and says surprise, Gene says that he wanted to make sure that everything was fine and Sophie gets up and leaves the table. Shannon explains to Gene and says that Sophie wont talk to her what so ever, as if she’s waiting for her to leave. Shannon wants to know how she’s feeling, so Gene tells her just to take her away and have a mom and daughter outing. Shannon decides to take Sophie out and Sophie tells her their meeting the mayor. Gene goes out with Nick and tells him that she doesn’t like to show how she feels, Gene asks him for a favor to try and talk to her about it. Sophie is receiving a place that is named after her for special needs children which completely surprised Shannon since Sophie would usually love to share something like that with her. Shannon goes to the opening of Sophie’s Place, it’s a place for abused children to get help. Sophie gives a speech about how as a kid adults never took them seriously at times, so this place is for kids like that who need someone to talk to.

While giving her speech Sophie gets very emotional, as if she’s trying to hold back her tears. Sophie explains that growing up being loved and respected she wanted to allow other kids to have that feeling, Sophie then cuts the ribbon outside officially opening Sophie’s Place. Shannon and Gene are incredibly proud of Sophie. Sophie says to Nick that she was happy to have her parents their and Nick says that they’re visiting because she hasn’t explained why she’s so upset. Nick tells her that she should deal with it now and that she shouldn’t run away from problems, Gene tells Sophie that he and Shannon will be going back to L.A. and says that if she isn’t ready to talk it’s fine. Sophie then decides to go and talk to Shannon, Sophie offers to show Shannon some of Whistler before she goes. So she takes her on a gondola, Shannon asks if Sophie wants to tell her off yet.