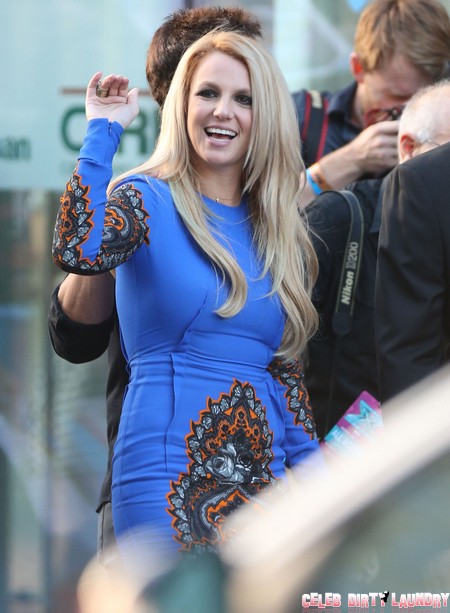 Glee stumbled back on the stage and drunkenly stared into the fading spotlight, like Britney Spears before her meltdown. The Glee-verse upped and left last week to build a potato farm in Alaska with Sarah Palin, but it seems this week it luckily returned to a holographic image of its former self.

Back in the day when Glee was still the hottest show on television, when John Stamos was still part of the recurring cast and Sam Evans (Chord Overstreet) shivered in Rocky Horror Picture Show undies, there was a Glee episode which made history. It was a breakthrough episode and had Britney Spears herself cameo for a few seconds. Britney fans and Gleeks all over the world died on their television sets – it was such an awesome moment for fans of the show.

Last night, Gleeks and Britney fans were introduced to the second version of this infamous Britney episode, namely “Britney 2.0.” The episode worked on certain levels, especially with the subdued Britney finale by Marley (Melissa Benoist), who did a much better version of the sentimental ballad “Everytime”. However, the fourth season premiere issues were still prevalent and the re-introduction of old characters (Noah Puckerman) came across as naïve and heavy handed. The stocky editing resulted in a half-baked episode of lackluster Britney songs and the dialogue, most specifically the breaking of the fourth wall by Brittany (Heather Morris), became stuck in literal characterization. In the world of computing, this episode might be akin to Windows Vista – bugged beyond belief and too clunky for regular users

However, there were bursts of back-handed brilliance. The Britney tribute went a step further and parodied the Britney meltdown with humourous quips and re-enactments. Heather Morris’ (Brittany) sardonic idiosyncrasies were perfectly held together in the set-pieces, while the scenery chewing cast snap, crackled and popped like a bad strobe light at a back-alley Britney Spears tribute performance. The Ohio/New York multi-verse snuggled up under a blanket of Rachel/Brody/Kurt/Cassie scenes and tied it all up in an extremely sexy dance number. Glee oiled itself up and steamed ahead for a comeback of epic proportions. It wasn’t really that epic, nor was it really steaming. It was more like puffing and heaving with Vaseline on its’ wheels, but it did resemble a certain Glee aura which we missed.

Jake (Jacob Artist) has truly been a shining example of newbie brilliance. Most of his scenes were filled with a strong presence and vocal artistry, unlike Melissa Benoist, who has yet to present her character without being so tremendously self-aware.

Glee is slowly coming out of the comatose state it was in during the premiere episode, but it is unfortunately still lingering in the cold recesses of stocky dialogue, weird editing and bad acting. The show was deeply scarred during the transition from the third season, but don’t worry fellow Gleeks, we’ll be watching each week to see Glee return to its famous quick wit and powerful storytelling. Until then, we’re unfortunately resigned to watching Glee bake potatoes in Sarah Palin’s oven.