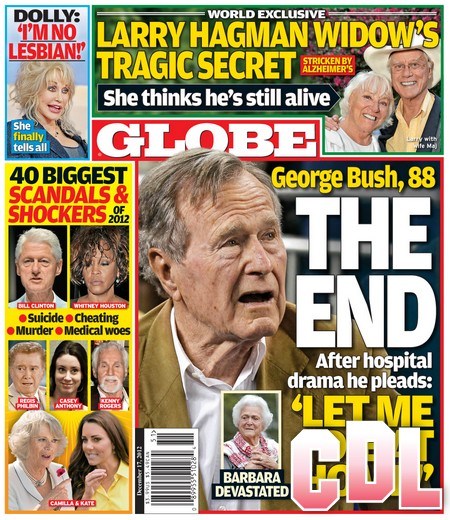 Kate Middleton’s pregnancy has supplied renewed energy to the ongoing battle between Prince William’s lovely wife on one side, and his step-mother, Camilla Parker-Bowles, on the other.   GLOBE promises to provide an in-depth review of the conflict between The Duchess of Cambridge and The Duchess of Cornwall in this weeks’ December 17th print edition.   Since Camilla got wind of Kate’s IVF treatment she totally lost her cool, falling off the wagon into a vat of booze and self-pity.  While Prince Charles is still next in line for the British throne, there are rumblings that Kate’s pregnancy and eventual delivery of a Royal heir will prompt Queen Elizabeth to make William her immediate successor.  Do we need to tell you that Camilla is not pleased?

GLOBE features a rundown of the top 40 scandals and shockers of 2012 in this week’s edition with details on them all.  Bill Clinton makes the list along with Regis Philbin, Whitney Houston, Kenny Rogers, and of course, Casey Anthony.  Murder mom Casey can pretty well count on remaining on all such lists in perpetuity.   I wonder on what grounds Regis made the list – but I’ll find out as soon as I read my copy of this week’s GLOBE.

Dolly Parton claims ‘I’m No Lesbian!’ on the cover of GLOBE and the print edition will elaborate in a tell all.  What’s to tell?  Did Dolly dabble in some bisexuality?  This is especially interesting since these will be Dolly’s own words, not a report from an unnamed source.

GLOBE brings us the sad news that Larry Hagman’s widow still thinks he is alive.  Stricken with debilitating Alzheimer’s disease, poor Maj can’t comprehend that the great actor and icon is gone.

We also learn that 88-year-old George Bush is pleading for the right to die at home after a horrific hospital drama.  GLOBE tells us that Barbara is devastated.  We hope that George and Barbara enjoy many more good years together but we trust that GLOBE will illuminate the situation for us in all its detail.

This week’s GLOBE is particularly important reading for me.  Now that Kate is pregnant I know that I can rely upon GLOBE to keep me abreast of all the goings on inside the palace.   There will be a jockeying for position as Camilla, Queen Elizabeth, Pippa and Carole Middleton vie for the rights and privileges afforded by this historic occasion.  Furthermore, the contest for which one gets the crown next will intensify between Charles and William.  Only GLOBE can be trusted to deliver the insider’s perspective and all the relevant information on big stories such as these. I’ll be picking up my copy of GLOBE’s December 19th print edition today!