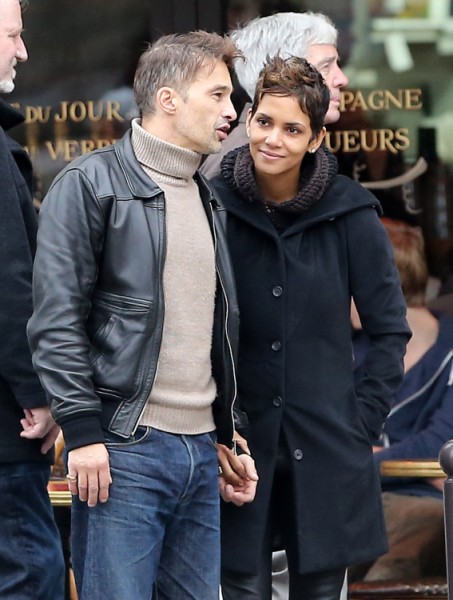 Halle Berry may have left her daughter behind in America for Christmas but she seems determined to make the most of the holidays with Olivier Martinez. The couple arrived in Paris over the weekend and were caught checking out a couple churches, St. Sulpice and St. Germain des Pres, yesterday. Naturally, this has sparked a lot of wedding talk for the couple who got engaged back in March of this year. Halle Berry shocked many by the engagement since she had said that she would never marry again but now we just know she was just single when she made that claim.

So check out the photos below. Can you feel a Halle Berry and Olivier Martinez wedding in 2013? It doesn’t take a genius to figure it would be in Paris. Olivier wants everything to happen in Paris. I’m not so sure I buy the whole marriage venue shopping idea though. I love churches. I grew up horribly catholic which basically means now I hate going to mass but I love checking out churches – especially during the holidays. They smell so nice and haunting and they’re so dark and mysterious that you can’t help but get swept into all the history. So if I was in Paris right now I’d definitely hit some up.

But I could be wrong. This couple is super serious. Perhaps a little scouting is going on. There are worse places to get married. But now that I think about it… can Halle Berry even get married in a church? I’m reaching back to my parochial days, so keep that in mind, but hasn’t Halle been divorced twice? And is she even Catholic? Things might be getting more relaxed but I seem to remember that divorced non-Catholics couldn’t get married in the Catholic church regardless of who they were marrying.  But it’s been awhile since I brushed up on my canon so don’t hold me to any of this. There are ways of getting around everything!