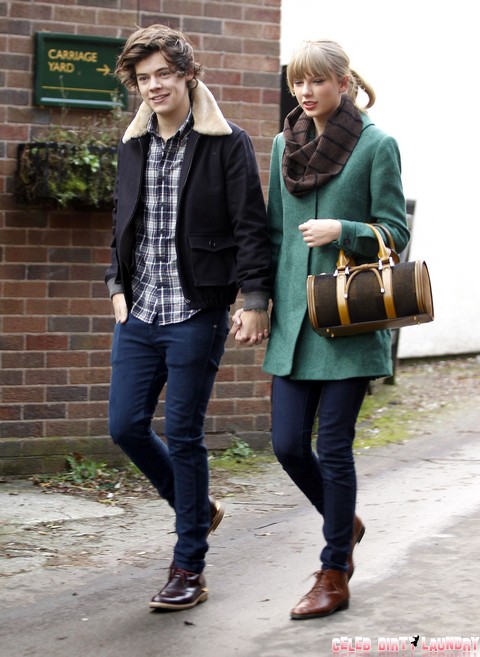 Taylor Swift is baby crazy, but she’s also image-obsessed. The barely 23-year-old singer has been playing housewife in strings of pearls and summer dresses since before I can remember, and we’re wondering if the game is about to become her reality. Taylor dumped Conor Kennedy after a summer romance, and now she’s attached to One Direction member Harry Styles. The two haven’t been shy about their relationship, and have even had very public sleepovers at her NYC hotel. But a new story suggests that they’re taking it to the next level, and planning an elopement!

A source reported to Us Weekly, print edition January 7, 2013, “I can see them getting married in a week, just going for it.” The duo have been holding hands like it’s going out of style, which is the Taylor equivalent of a porn movie. She tends to be super secretive about her romances, letting her hair down only in songs. But will Taylor forgo her dream-princess-fairy-tale-Romeo-and-Juliet-enchanted-wonderstruck wedding for Harry? Even if he is “totally in love,” as an insider claims, won’t she want to get married on the 13th day of their 13th month together, in a dress that sparkles? Won’t she whip her hair back and forth, and walk down the aisle to a chorus of herself, pre-recorded and self-harmonizing?

We thought that Harry was super overwhelmed with his baby-obsessed girlfriend. Don’t forget, she’s five years his senior, putting her in an entirely different stage of life. But she seems to think the biological clock is ticking faster—I guess you could say she wants to procreate to the tick of her own clock? And you know a baby would be a nail in the coffin that is One Direction, if reports of Taylor breaking up the band are true. Do you think the couple are eying wedding bands, or just enjoying each other’s company?