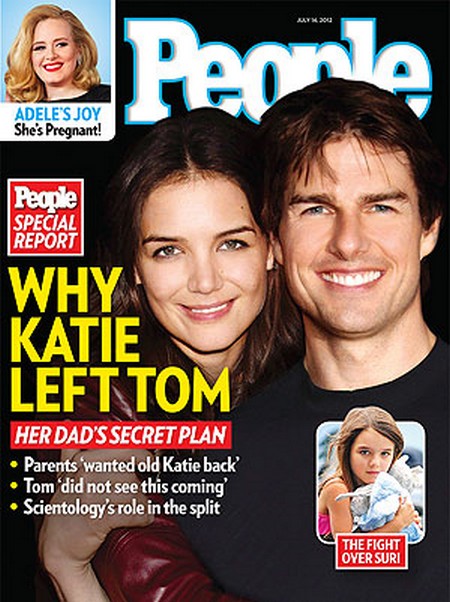 The current issue of People Magazine features the cover story ‘Why Katie Left Tom.’ The magazine has all the details on why Katie Holmes decided to file for divorce and leave Tom Cruise her hubby of six years.   The special report, is going to give us the scoop on Katie’s lawyer father Martin Holmes, and his secret plan.  Katie’s parents Martin and Kathy Holmes wanted to have the OLD Katie back and now they have their wish.  Furthermore, they were not happy with the Scientology robot Katie had become.

People has a source that reports Tom had no idea that Katie intended to leave him. “He had no idea this was coming.  He’s totally devastated and heartbroken.”  But the final decision was all Katies. “She’s a strong person and makes up her own mind,” says a source in her circle. And in the choice to end her marriage, “She’s unwavering.”

As news leaks daily it seems that Scientology was a big factor in the divorce.  Sources close to Katie are saying that Tom’s decision to ship Suri off to Scientology school was the main reason she got those running shoes ready.   CDL already reported that Katie had become wary of Suri’s involvement in the secretive, and head-scratching religion. Apparently, the six-year-old is at an age where she will be encouraged to be more involved in the church and Tom was gearing up to send her to Sea Organization.

Expect that this story will not quiet down any time soon.  Katie is looking for primary custody of their 6-year-old-daughter Suri and you just have to know Tom is not going to take that sitting down.    Rumor has it that Tom has been having Katie followed by Scientology goons to try and get dirt on her.   I imagine we will see a lot of details of their relationship played out in the press.

To find out all the details and where the legal battle is heading, pick up the current issue of People Magazine on newsstands now!