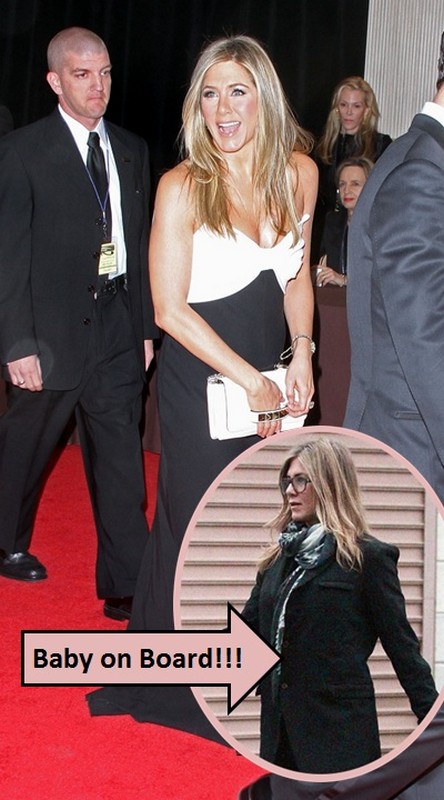 Is Jennifer Aniston pregnant and hiding a baby bump? Though no official announcement has been made, the Aniston Baby watch is in full swing.  Jennifer Aniston, who is currently engaged to fellow actor Justin Theroux, was spotted recently out in Los Angeles furniture shopping.

Aniston, who normally wears form fitting clothing, was seen wearing bulky clothing including an oversized coat while out with her fiancé.  There have been baby rumors making the rounds ever since Justin and Jennifer first made their relationship public, but Jen has never strayed from showing off her slim figure.  As a matter of fact, she has clearly made it a point to let speculators know that she was in fact not pregnant.  Why would she change her style now if not because she really is pregnant this time.

Adding fuel to the fire is the fact that Jennifer stayed away from the alcohol and seafood at her own engagement party.  According to Grazia magazine, “They had a margarita bar, but she didn’t go near it, opting for water instead.  It was so unlike her and didn’t go unnoticed.  She was also picky with what she ate, and didn’t touch the huge sushi platter, which is one of her favorite foods.”

It has also been reported that Jennifer has pulled out of two films including “Getting Rid of Matthew” and “Miss You Already.”  Though Kayleigh Dray at Entertainmentwise believes Aniston just may be clearing her schedule to prepare for her wedding, I’m not so easy to convince.

So Jennifer, what’s it going to be?  Are you going to make an announcement about your pregnancy and how ecstatic you and Justin are (followed promptly by Brad Pitt and Angelina offering their congratulations) or are  you going to wait until the baby is already 6 months old before admitting that yes, you were in fact pregnant?