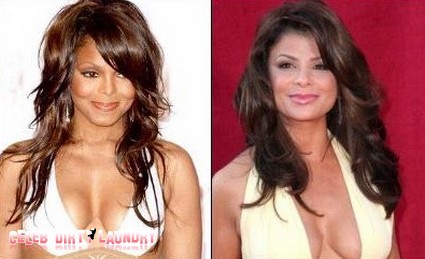 Janet Jackson has hated Paula Abdul for almost 30 years since she blames Paula for whoring around with her brother Jackie Jackson while he was still married.  Janet accused Paula of being a cheap homewrecker when she started fooling around with her married brother while Paula was a cheerleader for the L.A. Lakers 1983.  Now the battle is back on the front burner since Paula has flipped out at Janet for trying to replace her on The X Factor USA.  Paula is convinced that Janet wants the job of judge primarily to get revenge on her for ruining Jackie’s marriage.

As everyone knows Paula, along with Nicole Scherzinger and Steve Jones were unceremoniously tossed on their asses by Simon Cowell after ratings for The X Factor USA flopped.  Although Paula played nice in public, sources say that she was ultra-pissed off at losing what was probably her last decent job.

The National Enquirer Print Edition, March 12 has the scoop:  After Paula, 49, got the boot from X factor Janet, 45, immediately put out the word that she wanted the gig.  That infuriated Paula!  Although Paula had insisted that she harbored no bad feelings about leaving the truth was that the former American Idol was ‘very very angry’ according to insiders.

Meanwhile the tension between the women dates back to 1983 when Janet accused Paula of being a homewrecker for dating her still-married brother, Jackie.  The two had been best pals at the time, but the friendship collapsed when Paula, who was a cheerleader for the Lakers at the time, got caught in the middle of Jackie’s messy divorce.

“Janet felt responsible because it was through her friendship that Paula got to know Jackie,” explained the source.   Jackie flipped for her right away and even told his family that he could see himself marrying her one day.

Things got murkier because there were rumors that Paula was dating some of the Laker players behind Jackie’s back.  “The bottom line is Janet and the rest of the Jackson family thought Paula treated the Jackie pretty badly.  They eventually kind of made up, but things were never the same between them.”

“Janet would give her eyeteeth to get hired by Simon Cowell, and she’s rumored to have been in discussions with the ‘X Factor’ producers for weeks,” continued the source. “But once Paula heard about Janet’s plan, it tore pen all the old wounds from the past.  “Janet’s the last person she wants to see joining ‘The X Factor.’”

Can we agree that Janet’s statements last week to the effect that she was not interested in judging for Cowell were bullshit?  YES!

Can we also agree that Paula was a loose goose who contributed to the dissolution of Jackie Jackson’s marriage?  MAYBE!   Can we agree that Paula is insanely hurt about getting tossed by Cowell – especially because nobody in their right mind would, ever hire her again?  ABSOLUTELY!!!

To me, Janet and Paula have always been way over-rated – I find them both bland and boring.  Do you agree?  Let us know in the comments below.

RELATED: Janet Jackson Says She Will Be The Next ‘The X Factor USA’ Judge