Paula Abdul, Nicole Sherzinger And Steve Jones Get The Boot From The X Factor USA 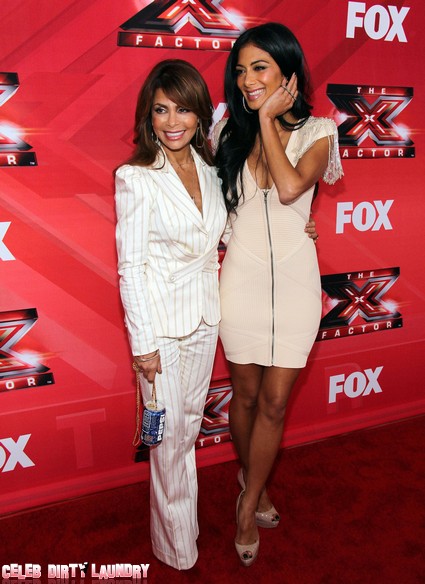 At the end of the the previous season’s The X factor USA Simon Cowell promised a bloodbath over the show‘s disappointing ratings. Now we know who has drawn the ire of Cowell and is bleeding with terminal wounds- it’s the host Steve Jones and that nasty judge Nicole Scherzinger – they are gone for sure.  But breaking news is that Paula Abdul has also gotten the axe.   I liked Jones – he was a cool dude but supposedly too boring… what the heck, the entire stupid show is boring.  Scherzinger I am glad to see leave – a pompous phony – Cowell can’t do worse.  Scholing though is the news that Paula Abdul won’t be returning.

According to deadline.com a Simon Cowell insider says that his longtime friend and American Idol colleague Paula Abdul won’t be returning as an X Factor judge next season. The source claims that none of the three left on their own accord and that it was cleaning house day at the so-so rated show.

Jones revealed his departure on Twitter:  “I wont be hosting next seasons XFactor which is a shame but I cant complain as I’ve had a great time,” he added, “Good luck to everyone on the show.”

E!Online claims to have a source that has confirmed that Scherzinger is off the show:  “X Factor took a lot more of her time than she ever expected,” the source said. “She didn’t have any time really to work on her music. She was doing X Factor six days a week.”

What a crock – Cowell is allowing Scherzinger to bow out gracefully – he made her an offer she couldn’t refuse: get lost or I’ll fire you. Scherzinger’s own music – what a joke – she was a Pussycat Doll and has nothing more to offer.

At the end of last season Jones expressed a love/lust interest in Scherzinger – maybe the two will hook up now that they are no longer co-workers.