Jenelle Evans is Back With Kieffer Delp Again, Says He Has Changed for the Better 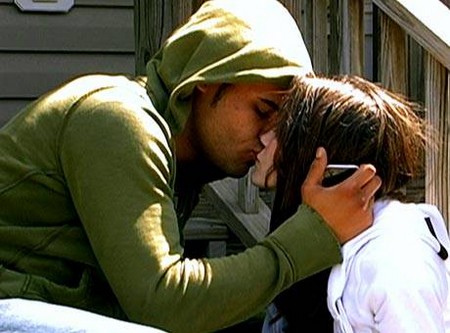 Teen Mom 2’s Jenelle Evans delivered some oh-so-shocking news yesterday that she and Kieffer Delp, her troubled on-again, off-again boyfriend are back on and together again. Shocker. When this news was met with disapproval by fans, Jenelle defended her decision. “[I don’t care] what anyone thinks. [Kieffer] has changed for the better. Everyone sees it but [you] guys [because you] don’t see what happens everyday.”

Jenelle also says that Kieffer, who is generally met with disapproval by fans because of his drug use, slacker ways, lack of job and mooching, now has a job and a car.

James also dropped a bombshell photo of a July 13 text message exchange between Kieffer and himself last night via Twitter. During their text exchange, Kieffer called Jenelle “crazy” and claimed he was “about to dip out on her and move to Texas.” He also  offered James $500 to stay with him for the next month, in addition to $15 for every pipe he sells while staying there. He also claimed he had more photos of Jenelle to sell to the tabloids and offered James a cut of whatever they’d pay him.

Kieffer claims he “played” James when he wrote that, and that Jenelle was sitting right next to him at the time and told him to write it, a claim which Jenelle backs up. However, as one fan put it, “Why would Jenelle get Kieffer to text James Duffy that? That doesn’t even make sense.” This question remains to be answered.

However, Jenelle and Kieffer appear to have resolved whatever differences they may have had last week and claim they are happy and in love. Jenelle even says she “eventually” plans on marrying him.