Jennifer Aniston Is A Stale Embarrassment – Having A Bad Hair Decade 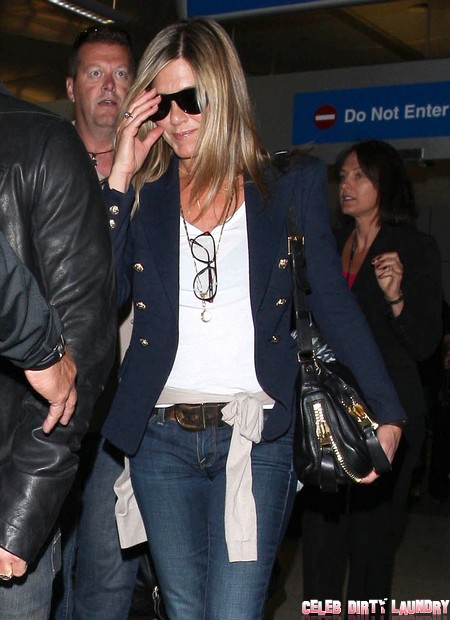 Jennifer Aniston did it again. On Saturday Jen and her fiancé Justin Theroux attended LACMA 2012 Art + Film Gala honoring Ed Ruscha and Stanley Kubrick wearing a black dress that practically showed off her entire chest.  Jen probably thinks she’s just being sexy. I think she is showing a lot of skin because she doesn’t have much else to offer.  Jen’s hair in particular leaves a lot to be desired.

A lot of people think Jen is a style icon.  She rose to fame in the 1990s as Rachel Green on the show Friends.  However, Jen was more known for her haircut than her acting.  Chris McMillan took her dirty brown colored, curly rat’s nest and turned it into a sleek layered cut with blond highlights.  It framed her face beautifully and made her features pop.  The hair cut nick named The Rachel became one of the most copied women’s haircuts of all time.  After The Rachel fad ran its course Jen’s hair only looked good when it was sleek with a red tone added to her natural brown hair. You can see it during the early episodes of the Ross and Rachel story line for several episodes.  During the remainder of the Friends run and in the years afterwards Jen has been almost exclusively seen as a blond and the same long straight hairstyle. I think that is a big mistake.

Jen’s skin tone is fair to medium, so blond hair washes her out. Her make-up is almost always neutral, and when you couple lack of color on the face with blond hair you don’t get a pretty face.  Instead what you get is a pasty, bland look that is very safe looking.  Jen’s bone structure and blue eyes are just a blur.  Couple Jen’s boring look above the neck along with her exhibitionism and all you have a big mess.   Even Jen’s breasts can’t save her look.  My Celeb Dirty Laundry sister Rachel Rowan wrote a brilliant article about the future Mrs. Theroux’s middle aged tid bits.  Jen can’t distract her critics anymore.

The problem with Jen’s hair goes beyond just the look she is trying to project.  While some may feel Jen’s unwillingness to experiment helps her brand, I feel it shows Jen is very insecure.  If you look at Nicki Minaj or Lady GaGa you see women who love to play with different looks. They don’t care what a fashion critic would think of their experimenting with wigs, clothes or makeup.  A true fashion icon inspires artists.  Jen just inspires men’s fantasies with plunging necklines and naked magazine photo covers.  I think Jen should read the November issue of Marie Claire magazine.

The issue has a feature called Marie Claire @ Work with an article called Do You Have Executive Presence?  According to the article’s pie chart both men and women feel gravitas is the most important aspect of executive presence.  The article also says if you don’t project yourself in a way that shows you are executive material you will be overlooked.  Jen being the executive of her career has had one movie after another flop.  Is she picking bad parts in bad movies or is she just not being offered quality parts? It’s worth noting that Angelina Jolie is used as an example of a woman with gravitas, but Jen’s name is not mentioned.