Jennifer Aniston Prepares For Twins – A Boy And A Girl! (Photo) 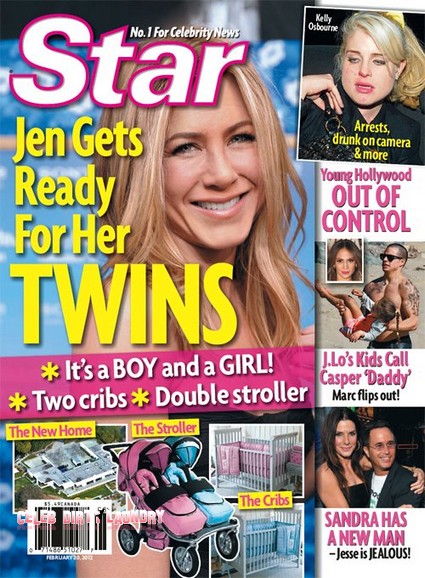 The current issue of Star magazine features a cover story exposing the elaborate preparations of Jennifer Aniston for the arrival of her twins. Of course one immediately jumps to the conclusion that Jen must be pregnant – but Star does not make that claim… we will have to wait for the print edition to learn the exactly from where the twins are coming. It is not yet revealed what role Jen’s man Justin Theroux has played, or is expected to play, in the twins’ lives.

Apparently Jen’s twins will not be identical since it is known by Star that there is one of each sex. The cover shows lovely his and hers cribs and a pink and blue double stroller for those family walks. Will Jen and Justin go over the top like Beyonce and Jay-Z did with The Notorious B.I.C. – Blue Ivy Carter? Hopefully not.

The cover’s pictorial suggestion is that Jen’s purchase of her massive Cali mansion – a veritable estate – is a part her nesting. What will the twins’ names be? I doubt there will be a Brad or Angelina in there.

Problem is that if we accepted all the tabloids’ predictions regarding Jennifer and twins we’d already be calling her Octomom. But it is certainly possible that Jen is pregnant and with twins.

The September 5th, 2011 cover of Life & Style Magazine featured Jennifer with claims of a world exclusive and blazoned across the cover ‘Fertility Doctor Gives Jen The good News – It’s Twins, Her Bump gets bigger!’ At that time Jennifer had found herself a new man in Justin so rumors of her getting married and being pregnant were circulating.

Back in December it was Star Magazine featuring a cover story ‘Jen: I’m Pregnant – With Twins.’ The magazine claimed that after months of fertility treatments Jennifer’s dream of becoming a mother had come true.

Last week Jennifer was spotted with an apparent baby bump which she tired in vain to hide under an especially large coat. Additionally, Hollywood Life reported that when last seen Jennifer’s breasts had the look of a pregnant woman’s. Although Jennifer denied she was pregnant when she and Justin were photographed exiting a clinic, the fact that she has skipped several high-profile Hollywood events recently, notably the Golden Globe Awards, might say otherwise. Normally you couldn’t keep a fame-lover like Jennifer away from such an event.

Is Jen finally pregnant? I she having twins? What do you think? Sound off in the comments below.