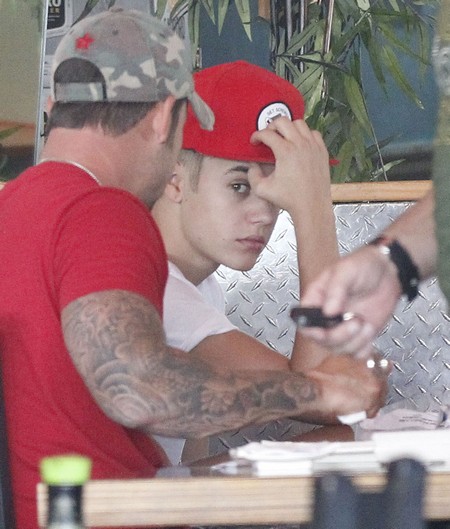 Multiple sources have confirmed what Celeb Dirty Laundry first called.  Justin Gomez and Selena Gomez are officially kaput.  For a week, the young lovers tried to keep their break up under wraps (sort of) but the dam was busted when Justin was seen stalking his prey at the Victoria’s Secret Fashion Show.  He was subsequently seen out on a date, not with Selena, but with VS model, Barbara Palvin.  Young Beliebers, it is time to move on.

I think I can guess how the fans are going to react to this, but what about Justin and Selena’s family?  I know one parent who is already starting the celebration.  Justin’s father, Jeremy Bieber, is no doubt about to have the most fun with his newly single, super rich and famous first born.  This can not end well.

Hey, Jeremy Bieber is still pretty young.  Not young enough to be dressing or acting the way he does at times, but young nonetheless.  He’s also no stranger to womanizing.  Perhaps that is a trait passed on to his son, Justin Bieber as this seems to be the path that he is on.  Hey, womanize all you want, but try not to end up like the douche nozzle your daddy was.  You know, like how he left your mother as soon as he found out she was pregnant with you.  Or like how he told your mother to her face that he was screwing the babysitter in her own bed.  Classy!

So Bieber super fans, be on the lookout for the latest headlines in the coming weeks, because they will almost definitely contain stories and pictures of Justin out with several different ladies (high fives for that), but he’s not going to look like the innocent Bieber we have come to adore.  No, it will most likely be a drunken version with his daddy, Jeremy, in the background supplying the “party favors”.

Jeremy, please don’t embarrass yourself or more importantly your son by leading him on the path to douchebaggery while you try to live vicariously through him.

Justin, I’m all for the “family first” mantra, but when it comes to your dad’s negative influence I would follow the “me first” mantra instead.