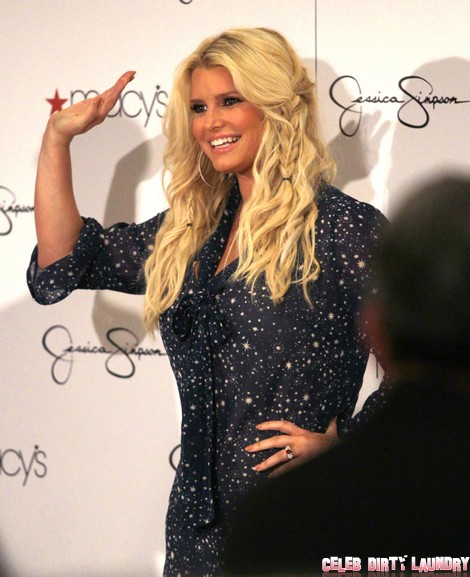 Jessica Simpson, the previously overweight ex-superstar, has revealed how she lost the weight of a small island in the Mediterranean by following a strict Weight Watchers diet plan. The blonde haired dodo turned into a small cow after her pregnancy, but by strictly adhering to a diet, the singer lost sixty pounds (27.21 kilo’s for our non-US readers.)

Jessica’s former private chef (has anyone attempted to ask why he is her former chef?) followed the famous Weight Watchers point system with a homemade menu, which included egg white omelets, chicken satays, whipped chick peas, soba noodles, and shrimp skewers. According to TMZ, “It all kicked off in July with a 15-day smoothie diet: 5 days of 3 smoothies a day (with 2 healthy snacks); 5 days of 2 smoothies a day (2 healthy snacks, 1 meal); and 5 days of 1 smoothie day (with 2 snacks and 2 meals).”

During her reign as a daytime blob, the singer was snapped attempting to get out of her black SUV. The “chicken from the sea” ex-reality star looked like a fake contestant on the Biggest Loser, but she huffed and puffed and heaved her way through her diet in order to look like a million bucks. There’s still speculation on whether Simpson only used the Weight Watchers point system, as many media outlets, including Celeb Dirty Laundry, spotted a fake image on the cover of a glossy magazine that alleged she was thin, curvaceous, and pointlessly beautiful. Fool me once, shame on you. Fool me twice, shame on me.

Her god awful Weight Watchers commercial sent chills down the spines of infomercial producers and caused a small baby boom amongst village idiots. The blonde blob is no more. Instead, a sparkly teeth Simpson is now the image of health and exercise. We’re all for Simpson being the regular girl next door, but who is she kidding? She has more money and fame than Ronald McDonald and the Hamburglar combined! Stop your lies Weight Watchers, and rather give us real, curvy, beautiful women – not a meaningless celebrity with too much time on her hands.