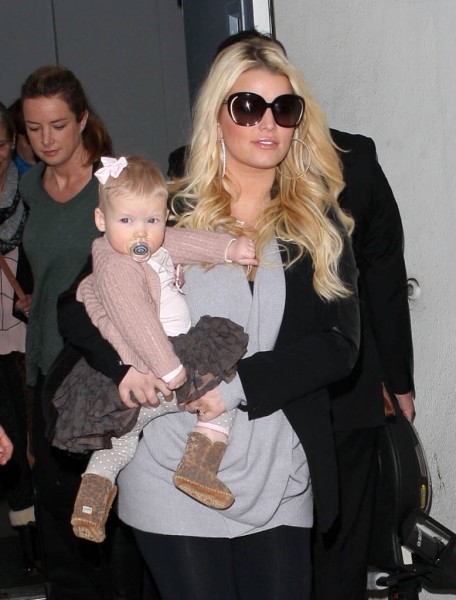 Christmas came early for me this year because a hilarious new story surfaced today reporting that Jessica Simpson’s weight loss is not from her Weight Watchers diet (or celebrity chef smoothies) but rather from the morning sickness!

“Jessica really didn’t start showing a significant amount of weight loss until the last couple of months, after she became pregnant with her second child,” a family insider told the National Enquirer. “She now believes that she conceived at the end of September!”

The source goes on to point out that Jessica was heavier than she wanted to be when she went on the promotional blitz for her Weight Watchers weight loss. She squeezed herself into some heavy duties spanx for her Katie Couric interview and only managed to be shot from the neck up for her first television ad. It was soon after that time Jessica Simpson’s new baby decided to make its presence known and the weight just magically melted off.

“Jessica was trying so hard to lose her baby weight that she never dreamed she could be pregnant again,” added the source. “But when her morning sickness kicked in, the pounds just melted away! She’s dropped more than 20 extra pounds and reached her goal  weight!”

Just fire her already Weight Watchers! Cut your losses and go. There’s no reason to put your business through any more of this nonsense! I’m not saying I believe it – completely. Morning sickness seems to be the popular trend right now and Jessica is nothing if not trendy. And, in Jessica’s defense, it’s not like she got pregnant just so she could get morning sickness to lose the weight, right? That would have taken way too much initiative and forward planning and Jessica just isn’t smart enough for that. No, this is just one of those blessings in disguise. And don’t b-tch at me about poking fun at a pregnant woman losing weight and potentially harming her child of important nutrients. This is Jessica Simpson we’re talking about. That fetus will be well fed in no time. Trust.

Do you believe Jessica Simpson’s morning sickness is the real reason for her weight loss?