Joe Gorga And Melissa Gorga Are Up The Creek: No Paddle In Sight! 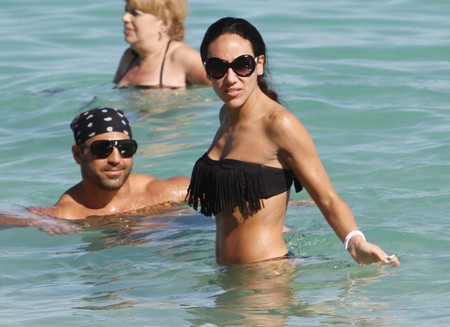 Why are Joe Gorga and Melissa Gorga selling their homes including their shore house that went through a major renovation? Because they really are having money issues. You know it has to be bad when your mortgage is twice what the home is worth.  It sounds a little shady that a bank would give a mortgage that much higher than the value.  Maybe Joe should buy fewer anabolic steroids – save a few bucks.

Melissa had previously said all this drama was not due to them having money problems but that’s not the case.  There’s been rumors flying around that the couple have overspent and went way out of the way to look like they have big money.  Joe is always talking about how much money he has which makes him look like a egotistical jerk. I don’t think that’s really the case but both he and Melissa have talked about Joe’s sister Teresa Guidice and how she owes people money and how she has so much in debt.  Are they any better?

The Gorgas are selling there shore home for $500K but they owe $2.25 million on the shore house mortgage. There also selling their other home for over $3 million. They say they want to move to Franklin Park so they are closer to Joe’s job.  Maybe they should move closer to the jail.  The mortgage they took out was way over what the home is worth.

They have plans to buy a new home closer to where they use to live. The new home has a outdoor kitchen and a salt water pool. They showed the home on the Real Housewives of New Jersey when it was mid renovation. Joe did all the renovation. Wonder if Joe’s sister Teresa will have to use some of her book sales money to bail out her brother and sister-in-law. Teresa’s always saying her sister-in-law Melissa is a gold digger but it looks like her brothers eyes were bigger than his wallet.  Keep checking back with us for all the latest Real Housewives of New Jersey dirt!