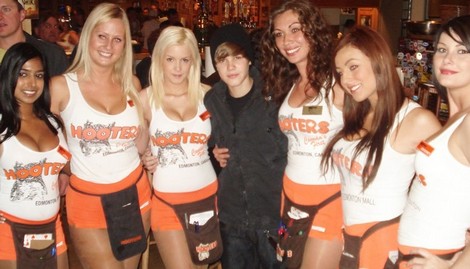 Following rumors of a break-up between Justin Bieber and Selena Gomez, the Biebs was in the mood for some breasts so he went to Hooters… chicken breasts! According to CelebsGather, Justin was dining there alone and NOT looking happy about it.

What are the possible reasons he could be at a Hooters and not look happy? Maybe he and Selena really are going their separate ways. Or maybe he was serenading a waitress there singing “if I was your boyfriend” and she rejected him.

The Hooters he was seen at is in Selena’s home state so if they were broken up why would he still be hanging around that area? Maybe there is a side of Justin we never knew about… Justin, the stalker?! I mean, he WAS eating in the restaurant that was reported to be him and Selena’s FAVORITE.

Weirdly enough, Bieber tweeted a picture of a Hooter’s cup while he was there with the caption, “This is why I got my owl tat lol”. See, maybe there’s something to the stalker theory. You’re tatting symbols of where you stalk and wait for Selena?

Furthermore, Selena hasn’t been heard from in almost a week! She’s tweeted one time in the past EIGHT DAYS! See, the stalker theory is looking pretty good.