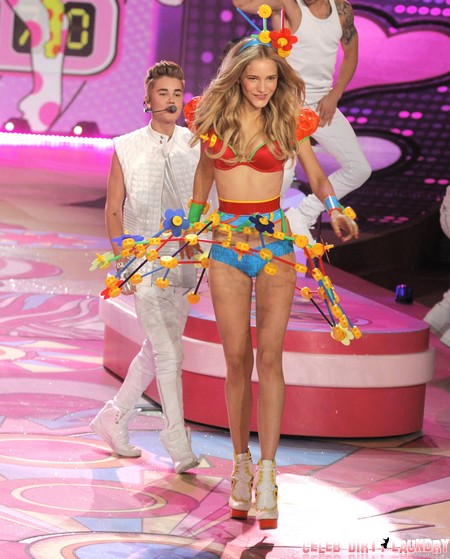 Justin Bieber is adding a new project to his resume. The Canadian heartthrob is in talks to create his own sitcom. ABC Studios is green lighting the project about Justin’s life before he was famous. TV Guide reports Justin will be an executive producer along with his manager Scooter Braun and Scooter’s company Scooter Braun Films. Matt Wolpert and Ben Nedivi are writing the scripts. Both writers are known for their work on Entourage.

The project does not have a name and there has not been talk of who will star in the show. Justin staring in his own show is unlikely. It’s not that Justin would not want the job, but because his work schedule keeps him very busy.  He just finished recording a new CD and is currently on tour to promote his new music. He made a television appearance on the Victoria’s Secret fashion show to promote his new music, too. In addition to his day job Justin films Macy’s commercials, fights with Selena Gomez, picks up Victoria’s Secret models, and is currently praying for his safety after a kidnapping, murder and castrating plot against him was foiled.

Also, think about this… the plot will revolve around a teenage boy. Justin could not pull it off. Justin is 18 years old and still a teenager but his new image paints him as a man with swagger. My money is on Disney star Ross Lynch. Ross is currently staring on Disney Channel’s Austin and Ally. Like Justin he is a singer, musician, dancer and actor. But then again, most Disney kid stars are singers. Justin’s on and off girlfriend Selena Gomez herself was a Disney star as well as their friend Miley Cyrus. ABC studios is owned by Disney so chances are a Disney star will play Justin even if Ross isn’t chosen for the role.

The development of an autobiographical sitcom will not be Justin’s first foray into television. He guest stared on CSI and hosted the reboot of Punk’d. Justin is also a star on the big screen. His documentary film Never Say Never, based on his journey from You Tube sensation to superstar was a huge hit. In addition there are fan photos on Twitter of a sign outside Justin’s Toronto concert stating that they are filming this stop of the Believe tour. This means speculation of a concert movie. Is there anything Justin can’t do – besides name the continents or keep his dick in his pants around pretty girls?

What do you think of a new Justin Bieber television show?

Editor’s Note: No doubt on Bieb’s TV show he and the Scooter he rode in on will insist that the writers pen in a Grammy Award or two.