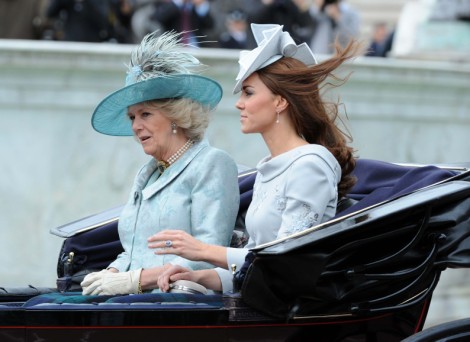 Prince Charles just celebrated his 64th birthday while on tour in New Zealand with wife, Camilla Parker-Bowles. I can’t help but wonder if his birthday wish had anything to do with her being Queen. Because just days after Charles announced that Camilla would stay Princess Consort after he was crowned King, he added some clever wording that suggested the jury is still out.

And contrary to what I’ve thought, Camilla seems to be giving Kate a run for her money on being the next Queen of England. True, a royal tour involving the Prince of Wales and the Duchess of Cornwall doesn’t get quite as much play as those pesky Cambridges but Camilla’s doing her damnedest to show the world she’s more than just the other woman. She hugged a kangaroo baby! She loves yoga! Apparently, Australia loves Camilla’s down-to-earth sensibilities. Is Camilla, with all her blue-blood, opting to be the true girl-next-door Queen right under Kate Middleton’s middle class eyebrows?

The Telegraph wrote a horribly sycophantic story last week entitled, “Why Australia fell for the Duchess of Cornwall”. How much did Charles have to pay for this one? It’s a positively glowing review. Kathy Lette writes:

“Camilla is blissfully free of prejudice, too. She treats everyone the same, from maid to monarch, and has a talent for making people relax in her company. No matter how dull the guest – the man who put the bore into Bordeaux; or the tweedy, beige battleaxe who sings her own praises for eternity, before running through the history of her illustrious family since, oh, the Crusades – Camilla listens with rapt attention, offering little witticisms and one-liners.

“I’m not alone in finding her warm and welcoming. Anecdotes from her many friends back up my observations. Penny Mortimer holds her in great affection. ‘Camilla is the least stuck-up person one could meet. And this comment comes from a pig-farmer’s daughter whose granny would curtsy to the doctor when he came to call!’

“The actor Richard E Grant is equally glowing. ‘Funny, direct and unexpectedly down to earth, with a ribald sense of humour. She makes you feel as if you’ve known each other forever in the way of the best friendships.’

“The human-rights lawyer Helena Kennedy agrees. ‘We stayed with them in Sandringham for a weekend and she was great fun. So earthy and normal about the usual couple stuff – him wanting to sleep with the windows open so that a gale comes through, and her wanting a warm bedroom. I once remarked how slim she was looking and she whispered to me, ‘Spanx!’ There is no grand stuff with her. She talks about her children the way we all do, thrilled when it’s going well and anxious when they are making decisions. You never have to worry that she will stand on ceremony.'”

That’s not the article one writes about the Princess Consort. That has Queen written all over it. And as I’ve said before, I’m OK with this. Kate has a lot to learn. Perhaps just as she watches Queen Elizabeth for tips on being royal, she can watch Camilla for ways to act normal in public. Kate doesn’t quite have it down yet and that’s totally fine. She’s young. It will happen. I have no idea if Kate wants to be the next Queen. The girl is ambitious so I have no doubt there’s a small part of her that does. But if she’s smart, she’ll keep Camilla close and champion her claim to the throne next to her husband. It may not be the popular choice (which is why Charles keeps wavering) but it will be the best for Kate in the end. I’m telling you… following Queen Elizabeth sucks. That woman is good at her job. Camilla won’t try to emulate her which will take a lot of heat off Kate when her time comes.

Do you believe Kate Middleton and Camilla Parker-Bowles are fighting over the crown or is Kate fine waiting her turn? What do you think about a Queen Camilla? Was the Telegraph article a bid to garner public approval for the job?