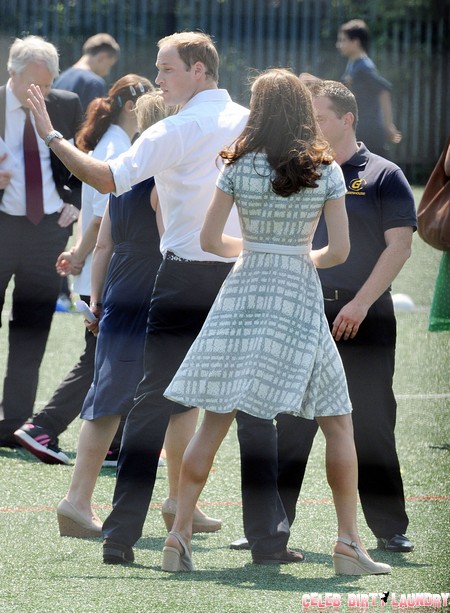 I know that life in Wales can’t be that fun compared to the Chelsea flat Kate Middleton called home before her wedding, but one must make sacrifices, right? Despite the naked scandal the future King and Queen consort of England are facing, started by France’s Closer Magazine and continuing with Denmark’s Se og Hor, Kate still has priorities, and one of them is getting the heck out of Anglesey! Prince William is currently stationed there while he works as a search and rescue pilot for the Royal Air Force, and he will soon have to choose whether he wants to finish his term, or sign on for another two years of service. Star Magazine reported, “If he stays with the RAF he will be living in Wales—200 miles away from her.” Kate doesn’t have anything in Wales, except for her prince and some privacy. Her entire family is living near London.

Apparently the life of Fergie (former supermodel Sarah Ferguson, who married Prince Andrew and then was divorced after a huge naked scandal) has given Kate a lot to consider ever since her Queen Victoria was published for all the world to see. There’s something about having your bare crotch on newsstands that makes you want your husband to spend time with you, instead of playing hero in the middle of nowhere.

Not to invalidate Willaim’s work—he has saved many lives and I’m sure the RAF is happy to have him. But it is time to choose! Before the wedding, “Kate made it clear to Will . . . she wants a proper marriage and relationship. If she lives in London, then so should he. She saw how military service drove Prince Andrew and Fergie apart in the 1980s, and she won’t let history repeat itself.” I mean, the big difference here is that Fergie snapped, had affairs, and tried to sell off meetings with her royal husband to make a quick buck. I don’t think Kate will do that!

It seems crazy to be so eager to move back to the land of paparazzi—but I would pick a mob of photographers over an endless expanse of rocks and a single grocery store, which is what Anglesey has to offer, any day! Kate is a social creature. It is totally unfair of William to expect her to give up her entire world for his job. Besides which, he’s hit 30. I expect Queen Elizabeth II has told him it’s time to stop playing with airplanes and start taking on more royal duties.

What do you think this ultimatum will mean for the couple? William could get stationed in Scotland instead of Wales. Could that be a compromise? The pair met in Edinburgh. It could be a little stroll down memory lane to revisit!